The Whedon Machine Rolls On: A Second Feature Is Announced For Bellwether Pictures 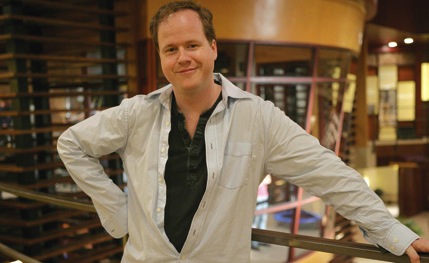 Doesn’t Joss Whedon look relaxed in that picture? While we know it was probably not taken in the past few days, would you ever assume that this extremely satisfied-looking man was not only directing a major motion picture featuring an ensemble of famous Marvel superheroes, but wrapping up another ensemble feature based on a Shakespearean play and announcing yet another full-length movie being made by his newly formed production company? What is Joss Whedon taking that is making him so incredibly productive, and where do we buy it?

Just a week after we found out that Whedon had produced and directed a full-length adaptation of Much Ado About Nothing, the director of The Avengers has announced a second feature, a supernatural romance called In Your Eyes. It will be directed by Brin Hill and will be produced by Bellwether Pictures, the small production company formed by Whedon and Kai Cole, and Michael Roiff of Night & Day Pictures. Whedon, who wrote the screenplay, with executive produce alongside David Rothenberg.

According to Deadline, In Your Eyes is a “metaphysical romance” about two people who are very, very different, but find a connection in a way “neither could have ever imagined.” Whedon released a statement:

“When I wrote In Your Eyes, I didn’t have the wherewithal (or the moxie) to make it without an established production house. I believe, as I did then, that it’s a pretty timeless romance, and now, with the creation of Bellwether Pictures (and Brin Hill’s elegant, passionate take on the piece) I have the opportunity to prove it. (I also have a 37% increase in moxie.) I love this team and I can’t wait to see them bring In Your Eyes to life.”