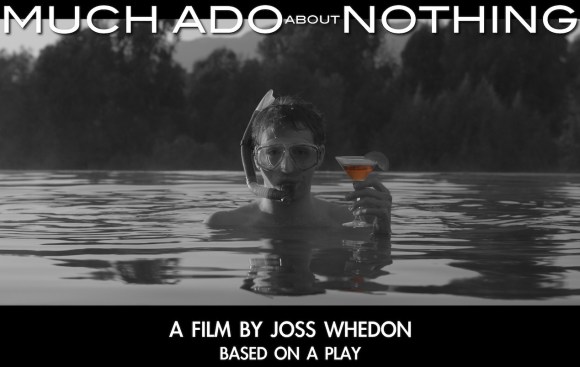 Some filmmakers shoot silly behind-the-scenes footage while they’re making a blockbuster movie. Joss Whedon adapted a Shakespeare play into a feature film with a bunch of old friends while shooting The Avengers and announced it by having one of said friends — Nathan Fillion — link to it in a Tweet. And that is how Joss Whedon’s Much Ado About Nothing came to exist. Guys, this kind of thing isn’t even supposed to be possible in this day and age, so Joss Whedon is a magician. Update: We have seen a press release with more details!

So, yeah — this happened. Shooting is officially complete on Whedon’s Shakespearean adaptation which features a cast led by Amy Acker and Alexis Denisof. Others appearing include Fillion, Sean Maher, Reed Diamond, Ashley Johnson, Clark Gregg (who was conveniently available), and Riki Linhome (of the musical comedy duo Garfunkel & Oates). Much Ado About Nothing is a comedy about two pairs of lovers, one sparring — Beatrice and Benedick — and one disgustingly in love with each other — Claudio and Hero. Judging by the graphic on the official site, it’s likely that Acker and Denisof are the former couple, but it’s pure speculation as to who will play the latter. Besides the cast, the only other information provided comes from Whedon’s Bellwether Pictures, stating that it is “proud to announce the completion of principal photography.”

Here is how mysterious this is: when you do a search for “Bellwether Pictures,” it comes up with sites featuring … pictures of bellwethers. (Bellwethers, besides being defined as “someone who assumes leadership,” are the sheep that lead a flock by wearing a bell around its neck. And now you know what that is!) There is no mention of Mutant Enemy Productions, which has been responsible for most of Whedon’s most famous projects. So it’s safe to say that this came out of nowhere.

It’s nice to know we can still be surprised by entire films, and it’s even more fun to know that Joss Whedon is behind it. Here is the whole poster: 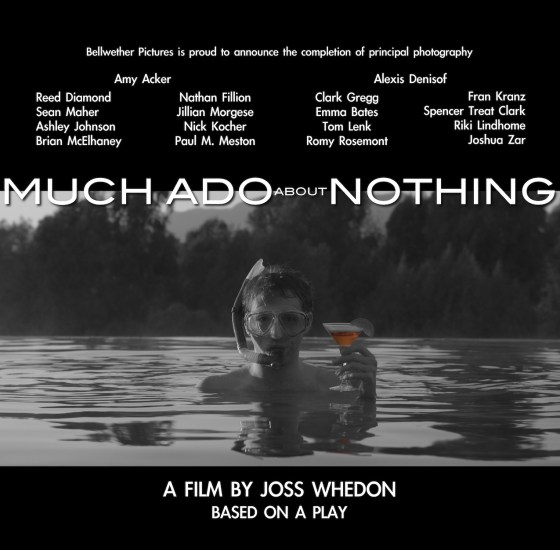 It’s only 11:00 in the morning, and we’ve already learned two things: What a bellwether is, and that Joss Whedon owns Hermione Granger’s time turner.

Thanks to a Tweet I received from Ray Hill, there are a few more details to report after reading an official press release, including this full cast list:

Filmed in just 12 days entirely on location in exotic Santa Monica, the film features a stellar cast of beloved (or soon to be beloved) actors – some of them veterans of Shakespearean theater, some completely new to the form. But all dedicated to the idea that this story bears retelling, that this dialogue is as fresh and intoxicating as any being written, and that the joy of working on a passion project surrounded by dear friends, admired colleagues and an atmosphere of unabashed rapture far outweighs their hilariously miniature paychecks.

MUCH ADO ABOUT NOTHING is the first feature from Bellwether, a micro-studio created by Joss Whedon and Kai Cole for the production of small, independent narratives for all media, embracing a DIY ethos and newer technologies for, in this particular case, a somewhat older story.

A crew list will also be provided soon, but Whedon favorite Shawna Trpcic will be doing the costumes. They are shooting for a completion date of late spring and will focus on releasing the movie through the festival circuit, “because it is fancy.”