What the Hell Is Brigsby Bear?

I was on The Onion when I saw an ad for the film Brigsby Bear, and it looked so surreally bizarre that I was sure it was a fake Onion ad for a made-up movie. Mark Hamill and Claire Danes in a film with a guy in a bear suit and a grimacing sun overhead? Sure, guy. But it turns out that Brigsby Bear is real, and according to The New York Times, it’s “a largely sweet, often very funny fairy tale about the perils and the sustaining pleasures of obsessive fandom.” O RLY?

Any mention of obsessive fandom immediately gets my attention—and I was so fascinated by the film’s WTF-is-this marketing campaign that I had to know more. Take a moment to watch Brigsby‘s intriguing trailer, and then rejoin me in the wider world below. 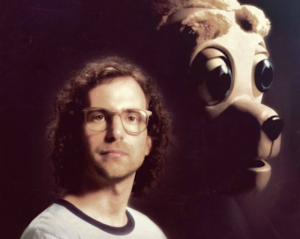 From all of the reviews that I’ve been reading, Brigsby is the unlikely story of James (SNL’s Kyle Mooney), who was raised in extraordinary circumstances with his only media the children’s television show “Brigsby Bear Adventures.” As The Times‘ Manohla Dargis explains:

He doesn’t merely love the plucky, heroic bear — as well as Brigsby’s adorable helpers, the Smiles Sisters, and his villainous foe, the Sun Snatcher; James has absorbed the show, its stories and ethos into his being. His walls are lined with images from it; his shelves are crammed with recordings of each episode and related paraphernalia. He can mouth old dialogue verbatim. He even sleeps on “Brigsby” sheets, as if tucking into his own fanboy nest.

While James’ situation where Brigsby is concerned is extreme, we’re meant to see it as a sort of parable of our world, which is more dominated by pop culture obsessions and dedicated fan communities than ever. As I write this, I have shelves lined with various superhero paraphernalia, I own pajama pants covered in Cap’s shield, and many of my friendships were forged in fandoms. I already identify with James—all that’s lacking is having been raised in a place where there was only one form of media to fixate upon. I’d be a total Brigsby Bear stan, too.

Over at Vulture, Emily Yoshida writes:

Even before we realize the scope of James’s circumstances, we understand that the show comprises the vast majority of his life experience: How to speak, how to interpret events, and even his first and only crush, are all informed by what he watches on his TV every day. It would feel outlandish if it weren’t a mere exaggeration of how almost all us have grown up in front of the screen.

Yoshida also notes the meta-mind-bending choice to cast the legendary Mark Hamill in the role of the man who raised James. Hamill, of course, is “a figure who has been burned into the psyche of generations of children,” and his casting is a genius move. While Yoshida thinks that Brigsby will ultimately be marketed as an “oh-so-random stoner cult movie,” she says it’s more about how the stories we tell go on to affect and change us in innumerable ways. And there’s an excellent pop culture ouroboros in that Brigsby Bear, centered around its characters’ cult-like obsession with media, might end up with a cult following of its own.

Dargis concludes that the film is “a sweet and sometimes delightful melancholic story of a lonely man saved by imagination and love,” and that while it “flirts with tragedy,” Brigsby Bear “opts for joy.” Reviews I’ve read have been enthusiastic, calling the result strange but warm and kind. It’s good to see that James’ fixation, misunderstood by those around him, is not mocked in the end but celebrated. Fandom and its devoted fanpeople can be reduced to a mere punchline or simply derided in broader cultural examinations of the phenomenon, but they appear to be the beating heart of Brigsby.

I’m excited to see the movie now, and Brigsby Bear, I’m sorry for not believing that you were real. I’ll gladly wear your image on a t-shirt.