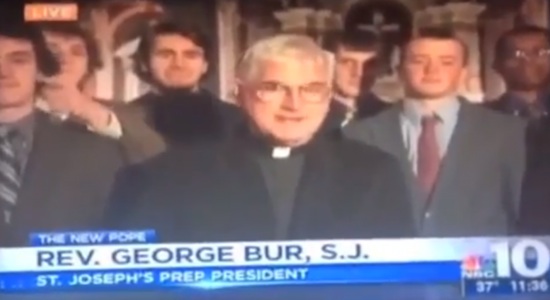 It’s a well-known fact that when you turn your camera on a teenager, they are going to do something stupid. It’s pretty much a law of physics, really. Case in point: This student at St. Joseph’s, a Jesuit prep school in Pennsylvania, knew he was on live television and, being any high school student anywhere in the history of time, just couldn’t restrain himself from taking probably the one opportunity he will ever get to give the dude in front of him a dreaded “wet willy” before an audience of millions. We know that feel, bro.  Thankfully, someone captured this moment of brilliance to share with the Internet at large, and we’re delighted to bring it to you below.

We also feel the need to mention that the dude on the receiving end here takes a wet willy like a total pro. Like, barely flinches. Clearly, this is not the poor dude’s first rodeo, but still, we are obliged to offer mad props, because keeping it together in that situation takes some doing.

Unfortunately, according to the Reddit poster, this kid is facing suspension for his on-camera shenanigans, but I’m just gonna say one thing to that: Totally worth it. Considering he goes to a religious school, though, it’s the wrath of God he should really worry about.

For interested parties, the thread is also full of all sorts of intriguing facts about Jesuit schools, all of which make this reporter really glad he went to public school, because this writing out psalms as punishment thing sounds pretty awful. You didn’t even have to be awake to pass classes at my school, which is the only saving grace that let me do so.