A tiny reordering is maybe in order 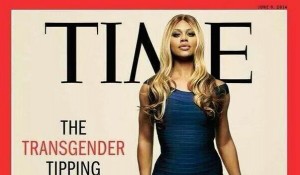 There is hardly a system set up wherein a list of top celebrity feminists in any given year could be definitive. That’s truer than ever for 2014, when celebrity feminism was particularly embattled territory, from basic misunderstanding of the word to persistent flaws in inclusivity. And so none of the women on the list the Ms. Foundation for Women and Cosmopolitan whipped up of this year’s top celebrity feminists are without their flaws (duh) — but it’s still a list worth paying attention to, especially in a year that saw such disparities in how feminism was received. We had Beyoncé standing in front of a giant “FEMINIST” sign at the VMAs, but we also had TIME suggest the term “feminist” had become enough of a nuisance that it should go away.

And so this list is fascinating to me, because though it’s hardly definitive (and we don’t know the demos of those who voted), in a way it’s telling about who’s speaking up and who’s getting listened to.

These are the results of a poll conducted by the Ms. Foundation:

I personally would have swapped those top two and put Cox in top place for all the amazing work she’s done of late, but it’s easy for me to see why Watson landed in the top spot: She’s more visible, both as a performer/former Hermione Granger and (sadly) as a white cis woman. Doesn’t make her more worthy, but it does mean more people paid attention when she talked.

Along with Cox, Watson’s also one of the women on this list who this year gave very public speeches about feminism, as opposed to just incorporating it into their work (which is also a good way to go) and dropping feminist soundbites in interviews. And though Watson’s UN speech definitely did not cover all the ground it could have in all the ways it could have, what it did do was use that aforementioned visibility of hers to call out for men to take an active role in the movement in a real and productive way.

I still do dream of Cox up in that top spot, though. Next year let’s aim for Cox’s speeches to get just as much play in the headlines and Facebook shares as Watson’s did this year. Let’s aim for the Coxiest year of all time.

And I would not be averse to some sort of Emma Watson/Laverne Cox feminist superteam.

We’ve come a long way, but we’ve still got a looong way to go. Discuss your quibbles, quabbles, joys, etc with this list below. Reorder it! Nominate those you think should have made the list but didn’t! Predict next year’s list! Predict ninth wave feminism’s list! Basically just talk it out. Let’s be our own poll.

(via TIME) (Image via TIME)