Laverne Cox Gets Her Time Magazine Cover, Talks Representation and Growing Up Transgender 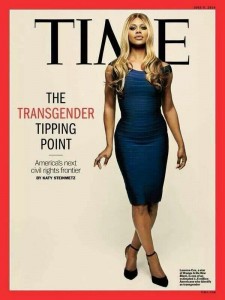 “[For trans kids in middle and high school now] there’s a way to connect through the Internet that I didn’t have. So you can connect with people who are like you, who may be in another part of the country. That didn’t exist when I was a kid. I think there are more media representations that young trans people can look to and say, that’s me, in an affirming way. There’s just so many resources out there now that it makes you feel like you’re less alone and gives some sort of sense of, okay, this is who I am and this is what I’m going through, as opposed to being ‘What the f*** is wrong with me?’ That was what I grew up with. — I’m imagining the TIME magazine editors scrambling in the wake of their controversial omission of transgender actress Laverne Cox from their 100 Most Influential People list. “Holy crap, what can we do? Should we put her on the cover?” Maybe I’m being cynical and their decision wasn’t motivated by PR, but whatever the reason we got this great interview, not to mention a highly visible cover story on the transgender rights movement, so I’ll take it.

Behind the cut: Laverne Cox-related news of a different sort.

Washington D.C.’s Hotel Rouge is offering a “Binge Watching” package to coincide with the June 6th release of season two of Orange is the New Black. For $750 they’ll basically host a sleepover for you and ten friends, with a 50-inch television, popcorn, food from the bar, wifi, booze, and most importantly “over-sized bean bag chairs.” It’s a neat idea, but… man. Rich people.