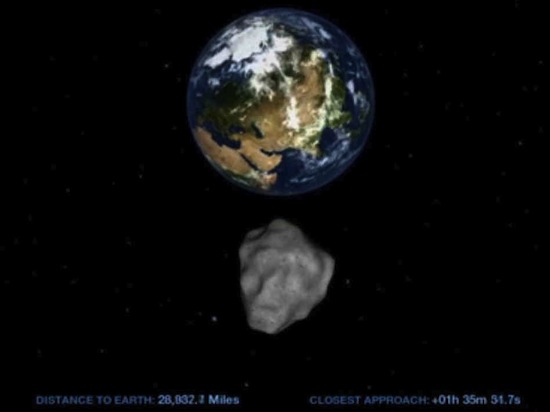 Well, by now you’ve probably seen and been equal parts terrified and mesmerized by the video of a meteor exploding in the skies over Russia, and if you haven’t, take a couple of minutes and go do that right now, because seriously, it’s incredible. When you’re done, though, make sure you come back here to get an up close and personal look at 2012 DA14, a giant rock from space that so far as we can tell isn’t going to explode in our atmosphere and blow out windows today, which is a nice change. Find out more about 2012 DA14 and watch NASA’s live stream of the asteroid flyby  — complete with commentary from NASA staff, who are full of all sorts of useful information about asteroids  — right here starting at 2:00 pm EST.

The 50 meter-long asteroid will pass within 17,000 miles of the Earth later today, which is only a close shave if you’re in space. If you’re in space, though, it’s a really, really close shave, meaning the asteroid will pass between the Earth and Moon, closer even than some of our satellites. It’s not going to hit us, so don’t sweat that too much, but it should make for a pretty cool spectacle — as long as you have a high powered telescope trained on a small patch of sky. Or, you know, if you’re joining us to watch live from the comfort of your desk.

2012 DA14 will pass over the Pacific Ocean between 2:00 and 2:30 EST today, but it will be hard to get a look at the asteroid if you’re not in Asia or Australia, have a telescope or binoculars handy, and know exactly where to look.  So save yourself some trouble and tune in to NASA’s live stream of the event in just a couple of hours.

And if your boss asks why you’re watching NASA TV and not working, just let them know that you’re terrified of being crushed by rocks from space and won’t be useful until you know the asteroid has passed. Today is pretty much the one day that’s a totally valid excuse, so it’d be a shame to let it go to waste.

UPDATE: The asteroid hasn’t arrived yet, but you can get a look at 2012 DA14 making its way through the depths of the solar system here. NASA’s Public Channel Stream, above, is till the best bet for NASA commentary closer to go time.

UPDATE: Looking like we’re a little light on the commentary angle. Sorry, folks, but we don’t tell NASA what to do. If we did, we would all be commuting by jetpack by now. Hope you’re zenning out on asteroid footage, because god knows that’s what our Friday afternoon looks like.