Pygmy Mole Crickets Can Jump From Water’s Surface, Can’t Turn It Into Wine 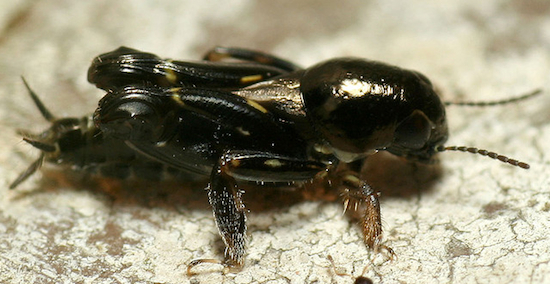 While they certainly aren’t capable of curing lepers of their grievous affliction, restoring the sight of the blind, or other supernatural deeds — insects just don’t make ideal religious messiahs — pygmy mole crickets might as well be some creature of the divine since the little buggers can actually jump from the surface of the water just as adeptly as if they were on dry land. While pond skaters are hoarding all the recognition due to their being more universally recognizable, pygmy mole crickets may soon change all that once they take aquatic insect locomotion to the extreme!

Researchers have noted that unlike the aforementioned pond skaters and fisher spiders that merely balance their weight on the surface of the water, pygmy mole crickets take advantage of the water’s viscosity in order to propel themselves away from danger. The insect’s back legs contain a pair of spring-loaded paddles that act, in a fashion, like oars. University of Cambridge zoologist Malcom Burrows happened upon pygmy mole crickets during a moment of respite while on an expedition in South Africa.

Congregating at the shore of a pond, which is their natural habitat, Burrows collected a few pygmy crickets and took them back to his laboratory for observation and analysis. On his findings, Burrows said:

They whack their legs onto the surface of water and actually penetrate the water. They sort of grab the water, and as their legs enter, these little paddles flare out.

Paddles? Springs? Pygmy mole crickets are starting to sound more and more like the Six Million Dollar Man of the insect world. Hopefully that natural escape mechanism will be enough to get away from André the Giant dressed as Bigfoot.