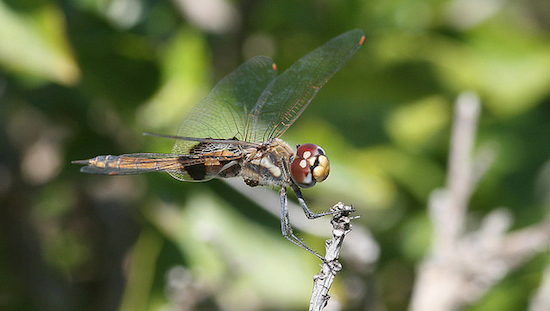 We have a lot to fear about insects regardless of their diminutive size: They sting, bite, spray acid, and on occasion use us as walking incubators for their eggs. To our advantage, insects lack the complex thought processes that made us humans the dominant species… or so we initially thought. Dr. Steven Wiederman and Associate Professor David O’Carroll of the University of Adelaide’s Centre for Neuroscience Research have discovered that dragonflies are capable of selective attention, a quality that until now was seen solely in primates. This ability is instrumental for when the dragonflies go hunting for things like mosquitoes, and will serve them well when they begin to hunt people.

Managing to wrangle a dragonfly for their study without weaponry or the loss of life, Wiederman and O’Carroll used a tiny glass probe to monitor the insect’s neural activity. What they found was that dragonflies appeared to have the ability of selective attention, commonly used when pursuing prey in the wild. On this ability’s application in hunting, Wiederman said:

The dragonfly hunts for other insects, and these might be part of a swarm – they’re all tiny moving objects. Once the dragonfly has selected a target, its neuron activity filters out all other potential prey. The dragonfly then swoops in on its prey – they get it right 97% of the time.

Okay, here’s what we got from that: Dragonflies are tantamount to fighter jets in that they can actually get a hard lock on their prey and swoop in for the kill, and the fact that they’re often successful in doing so means that we’ll have a disturbingly low chance of survival on the day we try to escape the prison hives of our insect overlords in the future. So, essentially, it’s going to be like getting away from said fighter jet on foot.

O’Carroll added that this is the first time selective attention on the level of humans has been seen in an invertebrate, which is a delicate way of saying that this is probably the beginning of a horrific evolutionary trend in insects that has already sealed the fate of mankind. This is the stuff nightmare fuel is made of, after all.

Just in case you weren’t already on edge and breaking into sweats, get a load of what scientists hope to do with these findings, according to O’Carroll:

We believe our work will appeal to neuroscientists and engineers alike. For example, it could be used as a model system for robotic vision. Because the insect brain is simple and accessible, future work may allow us to fully understand the underlying network of neurons and copy it into intelligent robots.

Robots powered by space age technology and fueled by insects’ inherent hatred for the human race at large. Sure, that sounds like a good idea.

(via EurekAlert!, image via neoporcupine)