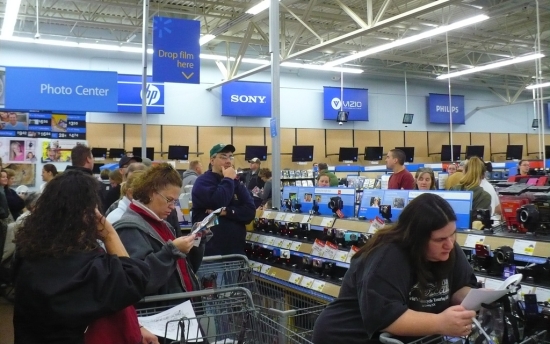 In today’s totally depressing news, it appears that the American impulse to needlessly purchase junk in bulk is alive and well. Black Friday no longer exists just on Friday, despite the infamous day’s name. No, our cup spilleth over to Thanksgiving as well. Walmart was already doing ridiculous amounts of business last night, and they’ve reported their best Black Friday events ever with almost 5,000 items sold per second between 8PM and midnight.

Walmart’s events were held at 8PM, 10PM, and 5AM, and brought massive amounts of business to the bulk retailer. One of the more amusing statistics to come out of all of this hubbub is that they supposedly sold around 1.8 million towels. Either there are a lot of The Hitchhiker’s Guide to the Galaxy fans out there, or people just love cheap crap. It’s almost certainly the latter, but one can hope.

The same press release that touts these numbers also mentions that around the same amount of employees didn’t show for their scheduled shift as did last year, so any protests have had a negligible effect on the behemoth’s continued success. The cogs of the machine really are able to be replaced without so much as a hiccup, which is both depressing and impressive.

(PR Newswire via The Next Web, image via laurieofindy)