Okay, but who names a sanctuary something as ominous as "Terminus?" 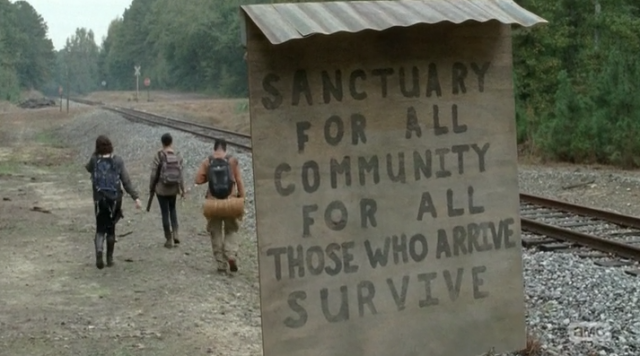 Last time on The Walking Dead: Daryl and Beth bonded over their feelings and stuff. Then they set a house on fire. Maggie, Sasha and Bob got stranded together, as did Lizzie, Mika, Carol, Tyrese, and Judith, who are walking towards that Terminus place (and for real, I don’t remember this happening).

We open on Bob, who does not look as happy to be alive as he was about two or three episodes ago. He’s also wandering around completely alone in his own sad apocalypse music video for some reason.

Then a truck and a motorcycle drive up — and  Glenn and Daryl are driving them. Oh. This is a flashback to when they found Bob, back before they had to abandon the prison. They ask him the three questions that Rick first asked that creepy lady at the beginning of the season, and they appear satisfied with his answers. Bob doesn’t ask any questions back, because he’s just happy to be with people.

After the credits, we’re back to present time. Bob is with Maggie and Sasha, stabbing zombies in a thick, horror movie-style fog. Sasha saves everyone’s hide, because she’s the best. There’s a brief scare when they think Bob’s been bitten, but the walker couldn’t break through the bandage, so everything is presumably fine. Moral of the story: when you’re in a zombie apocalypse, get horribly injured first.

Meanwhile, Daryl is teaching Beth how to hunt and track. She’s doing pretty well, riiiight up until she steps on a bear trap and (obviously) hurts her foot badly. Whoops.

Back with Maggie’s gang. Maggie wants to move, but Sasha and Bob tell her to wait until the fog clears, since they only have six bullets left and no compass.

Daryl and Beth make it to a cemetery, but Beth needs to sit down — her foot is still injured. Naturally Daryl offers her a piggyback ride because oh my god make out already. Beth comes across a gravestone that says “Beloved Father” and pauses, so Daryl picks some weeds and lays them across the grave, and then they hold hands. 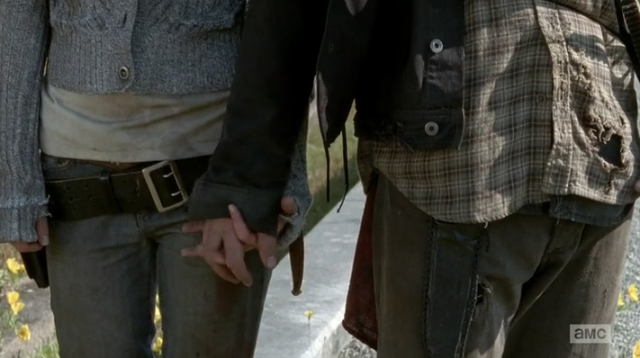 Something awful is definitely about to happen to one of these characters, isn’t it.

The fog’s finally cleared and Maggie’s gang comes across the Terminus sign. Bob mentions that they’d heard a message about it on the radio on their way to get medicine six or seven episodes back. Sasha is skeptical, but Bob and Maggie convince her to go for it.

Beth and Daryl make it to the funeral parlor at the end of the cemetery. It’s still petty clean inside, but there are no people, save for a couple of already-embalmed dead bodies lying in caskets and the morgue. One of them looks like they’d already turned before they’d been laid there, and Beth thinks it’s kind of beautiful that someone tried to give them a proper funeral.

Bob and Sasha are making a camp. Sasha admits that she doesn’t see  the point in continuing on to Terminus. After all, Glenn’s probably dead and they’re most likely next — especially Bob, who’s still bleeding from his prison wound. She suggests that they find some higher ground in a nearby town and set up camp there.

Back at the funeral home, Beth and Daryl are scavenging for food. They come across peanut butter and jelly, diet soda, and pig’s feet. “That’s a white trash brunch right there,” Daryl says. Then he realizes that there isn’t any dust on the cans, meaning that someone put together this stock recently, so they shouldn’t take all of it. Beth is all happy that Daryl’s exhibiting signs of a conscience. “There’s still good people!” she says. Beth, honey, you are toying with fate right now. You know who else believed that people were basically good? Anne Frank.

After setting up a very high-tech walker alert system (a bunch of cans strung along the porch), they tuck in for the night. Beth plays piano by candlelight (“Be Good” by Waxahatche) while Daryl watches from the doorway. Then Daryl hops in the casket to sleep and tells her to keep playing, and oh my God I can’t deal with you too anymore, you’re being too cute and something terrible will happen because of it.

In the morning, Bob and Sasha wake up to this note from Maggie. 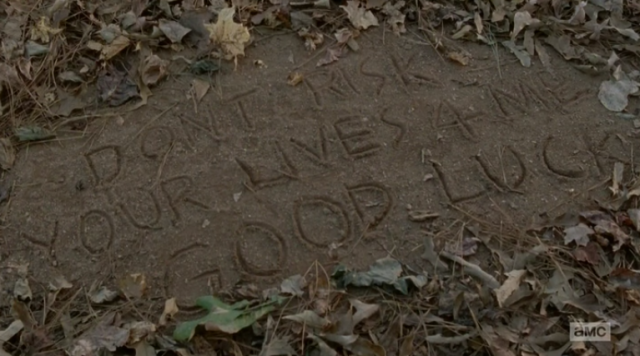 Bob wants to go after her. Sasha is hesitant. They go anyway, Bob grinning the whole time. “Why are you so happy to be alive when we’re walking into the heart of darkness?” Sasha asks. Because Bob has friiiiends, he says. Maybe it’s my high shcool marching band brain kicking in, but I think it’s worth pointing out that they’re walking at the exact same pace with the same feet in front of themselves for pretty much this entire scene. 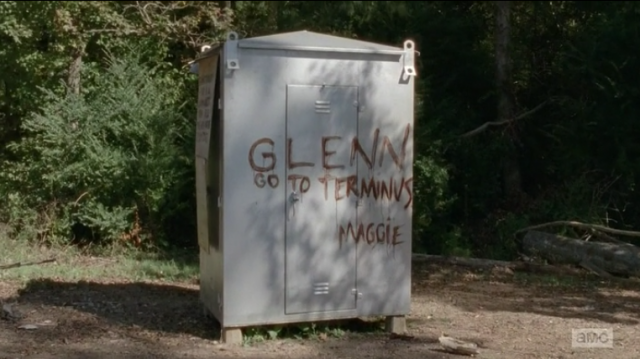 Beth and Daryl are just about to sit down to their second helping of White Trash brunch when their walker alert system goes off. Daryl goes out to look and it’s a one eyed puppy sweet lord 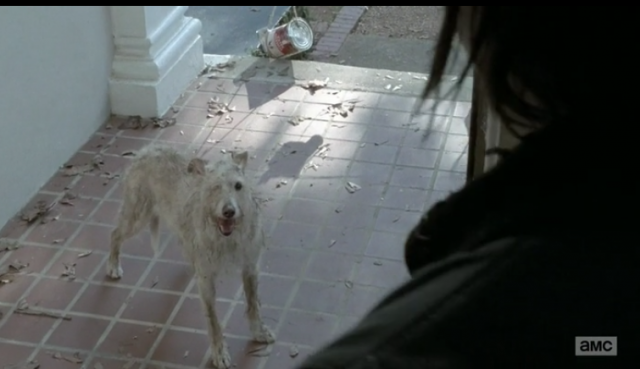 HELLO YES I AM A DOG AND I LOVE YOU

He goes to pet it and the dog bolts, which is probably why it’s still alive in the first place.

Nighttime again. Bob and Sasha can’t sleep because some loud walker is nearby and probably caught on something. Bob wants to know why Sasha thinks Tyrese is dead, because if he were alive he’d be going for Terminus, too. “Up until now I thought you were the toughest person I ever met,” he says. “Which is weird, because you were the sweetest, too.” DAMN BOB, THAT WAS SMOOTH. He goes back asleep to let Sasha ponder his smoothness.

Beth and Daryl are about to leave the funeral home. Beth wants to leave a thank you note. Daryl one-ups her cuteness and suggests they stick around to meet their pig feet benefactors. “So you do think there are still good people! What changed your mind?” Beth asked. Her, obviously, but it takes a while for Daryl to admit it — and when he does, he does so silently with that trademark eye-smoulder all the fans just love.

Then the dog comes back, and surprise! He brought a whole horde of walkers with him. Also, the dog is probably dead now. Sadface. Daryl tells Beth to run for cover outside while he leads the walkers into the basement and escapes around them. When he makes it out, he finds Beth’s stuff on the ground, and a car speeding away. 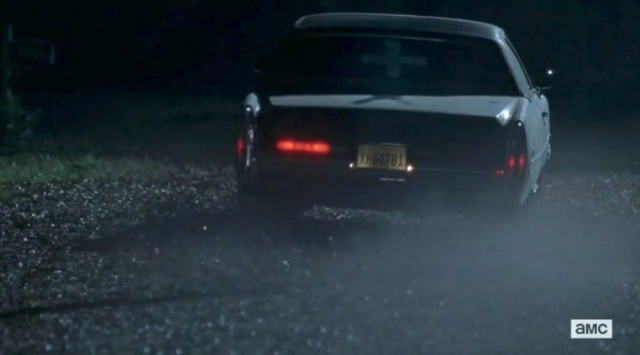 Ohhh boy. That’s… that’s really not good and I do not like it. This is what you get for being adorable, you stupid characters!

The next day, Bob and Sasha continue on the trail. Maggie’s leaving a lot of notes for them. Well, for Glenn, but you know. Sasha keeps suggesting they stop every time they find high ground, but Bob refuses to let Maggie be out there alone, so he’s determined to continue on whether Sasha wants to or not. Which… wait, wouldn’t that leave all of them alone? Oh, and then they kiss?? And Bob leaves. I didn’t quite get what was going on here, except that maybe Bob assumed he would convince Sasha to come to Terminus with the power of his tongue. I’ll admit, it was hella smooth. If only Daryl and Beth could close deals like that.

Speaking of how those two are probably never going to get to make out now, Daryl is having a less fun time following his trail, especially when he comes to a fork in the road and doesn’t know which way the car that abducted Beth could have gone. He decides to deal with this by sitting down and looking sad.

Sasha finally finds her high ground, but it’s empty and — well, you know. Alone and stuff. She fights back tears and goes towards the window… where she sees Maggie on the ground outside? About to get attacked by walkers, too. Well, that’s surprising. 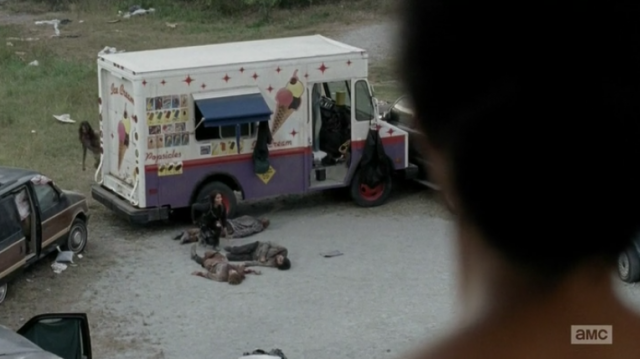 WELP, SO MUCH FOR BOB HUH

She immediately runs down to help and suddenly finds herself surrounded by walkers. After the standard commercial cliffhanger, the two fight them all off and catch up. Maggie admits she heard Sasha suggest that Glenn was already dead, but she stopped near a town anyway because she knew Sasha would look for one and she wanted to wait for them. “I’m not giving up, but I need your help.” And then she says the same thing Bob did — that Sasha wants to find Tyrese, but she’s too afraid. So they make a plan to go find Bob and get to Terminus together. I’ll be honest, I kind of wanted them to kiss at the end of that scene, too.

Meanwhile, just in case you forgot that everything is the worst, Daryl is still sitting on the ground in the middle of a crossroads and gets found by a bunch of big scary white dudes with guns. Seriously, if there’s one thing I’ve learned from the Walking Dead, it’s not to trust a non-ethnically diverse group of dudes in an apocalypse. They start claiming articles of clothing on Daryl and he punches the leader in the face, who starts laughing hysterically and — accepts him into the trashy white redneck asshole family, I guess?

Finally, the episode begins as it ends — with Bob walking alone. Except this time, Maggie and Sasha have caught up and they all hug like the big happy family they are. Oh, and also, Glenn’s found himself a sign to Terminus, so everything is great! Except DID WE ALL FORGET ABOUT BETH, YOU GUYS. I’m still not okay with how that storyline worked itself out.

All in all, this episode was pretty solid. Any episode without Rick in charge is fine by me, of course, but “Alone” also managed to keep up with the current trend of setting up manageable, relatable, natural-feeling character arcs, rather than just throwing people down in certain places like chess pieces. I’m a bit wary to see what’ll happen once they all manage to reach Terminus, of course, because there’s only three episodes left and something tremendously awful has to happen that can top the prison battle. Still, I remain cautiously optimistic. You know, unless Beth gets raped or murdered by those car people. Then I will probably quit.