In which everything appears to be coming up roses. 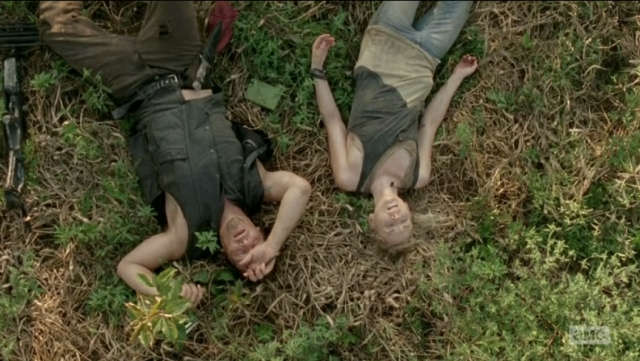 Wait — what’s this? Another episode with minimal to no Rick Grimes? The second half of this season is looking better and better all the time.

Last time on The Walking Dead: Rick and Carl and Michonne were all wandering around feeling bad, and it was a lot better than that sentence makes it sound. Also, remember when The Governor totally decapitated Hershel and then the two awesome lesbians freaked out, and Maggie got Glenn on the bus out of the prison but then went back for Beth and it left without her? That’s kind of important.

The episode starts with an odd flashback voiceover of Beth telling her diary about the prison they found and how it’s totally going to be the best thing ever and they’re all going to be a safe happy family full of hope and dreams and magic, or whatever. This is obviously meant to be ironic. Underneath the voiceover, Beth and Daryl are running from walkers. She’s out of bullets, but Daryl protects her with his crossbow until they make their way out of the forest and into an adjacent meadow, where they finally collapse.

After the credits, it’s nighttime. Beth and Daryl have built a fire, and Beth wants to “do something” about the other prison survivors who may or may not still exist. Daryl is non-responsive, so Beth barrels out into the night without him to go tracking.

She’s back at dawn, of course, and finally Daryl puts some of his tracker knowledge to use and comes across a little pair of footprints that might be Lizzie’s or Molly’s (and of course I don’t even remember who Molly is). It means they were alive four or five hours ago, Daryl says sardonically. He also stops to point out that having faith is meaningless and her decapitated father was the only thing holding them together at the prison. Beth does not appreciate this. 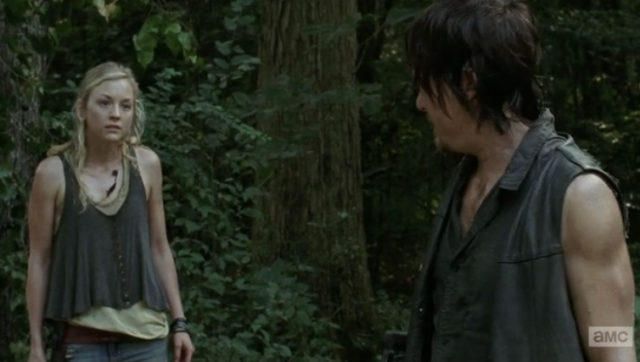 As they continue down the trail they discover a bunch of dead walkers. Daryl says that judging from the trail, there were dozens in this area before. Things do not look good for these kids they’re looking for — or for Beth, as a walker gets the jump on her and Daryl has to physically remove him so she can stab him in the head.

Eventually they make it to the train track and find a bunch of walkers hunched over, feeding on a small group of people. None of them look all that familiar, but Beth freaks out anyway at the injustice of it, and later tears those pages out of her diary and throws them into the fire.

Now let’s move on to Lizzie and Mika, who are making their way through the forest alone. Lizzie tells Mika not to cry, and then asks Tyrese, who’s also apparently with them, how much longer they’ll be walking. He turns around and OH LOOK HE HAS THE BABY. 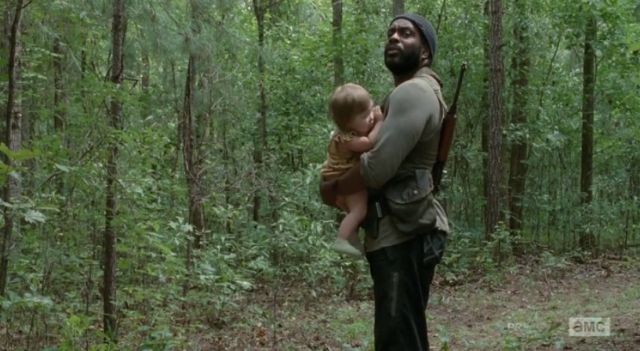 Surprise, bitch! I bet you thought you’d seen the last of me.

I mean, in hindsight I never seriously thought that they’d kill off Judith, but when they didn’t address it in the midseason opener I started to have my doubts. It would have been incredibly ballsy of them, so of course I guess they weren’t going to do it.

Later, at their nighttime campsite, Judith starts crying and attracts a couple of walkers, so Tyrese gathers everybody up and gets the hell out of there. I really appreciate Tyrese being the zombie-killing babysitter here — even more so because I’m still convinced Lizzie had something to do with the death of Tyrese’s girlfriend and Carol was only covering for her, and that’s going to blow his mind when he finds out.

In the morning, the gang finds some grapes to pick, and Judith is still crying. Tyrese stops to change her diaper (on a side note, how is it that he took the diapers and bottles, but left her carrier? I know those things can be unwieldy but at least you’re less likely to drop her on her head if a walker comes at you unexpectedly, right?) She won’t stop crying after he changes her, though, and a bunch of walkers show up to gnaw on delicious baby flesh.

Tyrese puts her down and tells the other two girls to watch her while he goes into the bushes to investigate, which, by the way, is when one of those baby carriers would really have come in handy. The noise turns out to be a bird, but Mika goes bolting out of there anyway, and Tyrese and Lizzie go running after her. Lizzie says it’s his fault for yelling at her. God, kids are the worst. Why can’t you all be quietly emotionally damaged zombie hunters like Clementine?

Eventually they find her awkwardly standing in the words, and she apologizes. She got scared. Tyrese congratulates her for making the right decision in running from walkers, much to Lizzie’s chagrin, but he also points out that she needs to stay close to the group next time. Mika feels bad about not being more like Lizzie, but Tyrese says it’s okay. “You each do it your own way, but you still get it done,” he says. Like him and Sasha, Mika asks? “No, not like Mike and Sasha, because you’re still here and Sasha’s gone,” Lizzie says. Jesus, way to rub it in, kid.

Then they hear what sounds like a scream and Tyrese leaves them alone to go help. Mika does not like this idea, but he goes anyway, and comes across those people at the train track who are still very much alive, for the most part — guess this is meant to happen concurrently to Beth and Daryl’s vignette. While he’s helping them, Judith starts crying over , and Lizzie puts her hand over her mouth. Oh no. Please tell me we’re not about to get into M.A.S.H. territory. The walkers start coming, but Lizzie’s off in her own little “I’m about to kill a baby” world, even when Mika shoots one of the walkers. Tyrese hears the shot, having been unable to save anyone at the tracks, and turns back around to see oh my god it’s CAROL. 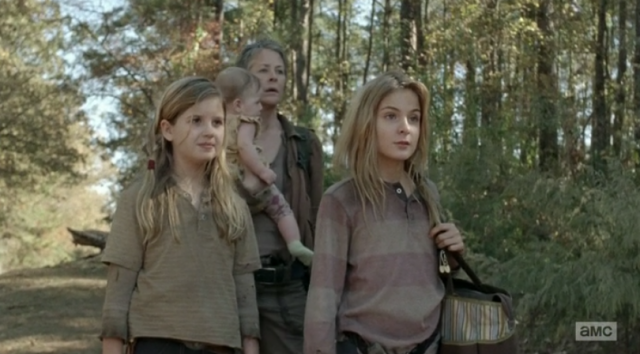 Oh boy. Those are some conflicting emotions Tyrese is feeling. He decides to go with hugging her for now, mostly because he doesn’t have to be babysitter alone anymore. The one guy who attacked Beth earlier in the episode is still alive right now but bitten all to hell, and tells them that up the tracks there’s a safe place where they can take the kids. I hope he’s not talking about the prison, because that’s kinda not a thing anymore. They leave him to cry over the remains of his friends and await his terrible fate.

“I didn’t see you get out,” Tyrese says to Carol. Oh no. Does he not know about her confession? She rolls with it and tells him that she was out… looking for stuff. It feels awkward, but Tyrese doesn’t notice, and Lizzie’s just happy to have her surrogate mother back. Me, I’m just happy nobody killed that baby. I was fine with off-screen zombie death, but death by PTSD-ridden preteen would have been too much.

New vignette time! We find Maggie sharpening a knife on a rock. Sasha is tending to Bob’s wounds. Sasha’s pretty bummed that they couldn’t find Tyrese, but Bob tells her not to give up hope. I get that this needs to be done, but I’m kind of tired of hearing the whole “We don’t know who else got out let’s not give up hope” speech from literally every single person. Maggie insists that she’ll be able to track the bus and find Glenn on her own, and Bob and Sasha eventually follow. Bob is in a creepily good mood, mostly because he seems to have come right up on the fourth wall and figured out that somebody up there must like them and want them to all get back together with each other.

Finding the bus ends up being easier than they thought, because there’s one stopped on the side of the road. Maggie goes running, but nobody’s inside. Well, nobody except a whole bunch of walkers. Bob and Sasha agree to help her open the bus door so she can see if Glenn’s one of them. One by one, they open it and she stabs ’em, until they all come busting out and a minor brawl ensues. None of them look familiar to me, but Maggie still apologizes to a dead body anyway after bashing its head on the side of the bus, and Bob seems to recognize them. Glenn’s not there, though, so Maggie jumps into the bus to investigate further, comes face to face with what looks like Glenn from behind, and stabs him in the head. Then she starts cry-laughing.

Aaand then we see Glenn, totally 100% alive and stuck on a dilapidated second floor of something, surrounded by walkers. How did you even get up there, dude? We pull back and oh! Great. He’s still at the prison, alone. That’s useful. Somehow there’s a door behind him, so he turns back around and wanders through searching for other survivors, still coughing. But seriously, how did he get up there. He comes across a bed covered in riot gear and pushes all the very useful gear aside to lay down and feel sad, until he finds a polaroid of Maggie, cries a little, and decides to get the heck out of there — with a whole bunch of supplies and that riot gear, of course. See, this is why Glenn is my favorite.

It’s touch and go for a second, but Glenn barrels through like the football player he was never meant to be until he finds that awesome lesbian girl (Tara?) from The Governor’s team, who is sitting in a cage feeling sorry for herself. He turns back around to get her and convinces her to leave with him, even though she was part of the team that took the prison down. Oh yeah, and he also throws the sickest molotov cocktail ever at the walkers outside. Did I mention that Glenn is my favorite? And he looks great in riot gear, guys. Just throwing that out there. 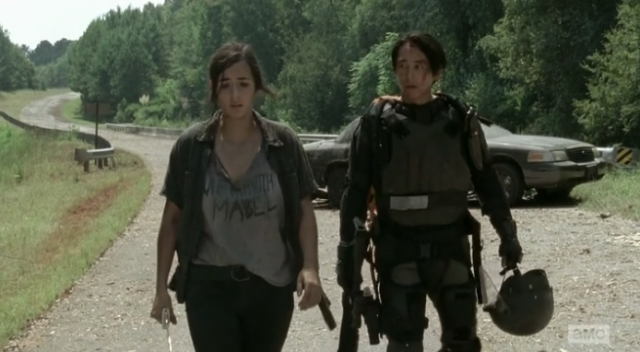 They make it out and Glenn finds out from her that Hershel is dead. She apologizes for her role in things, calling herself a “piece of shit” and that he shouldn’t want her help. But Glenn tells her he needs her help to find Maggie, and that they just have to believe in themselves like Hershel said. Then he passes out while fighting zombies, and Tara saves him, just in time for what looks like the stars of a bad Syfy movie to come out and start asking questions. 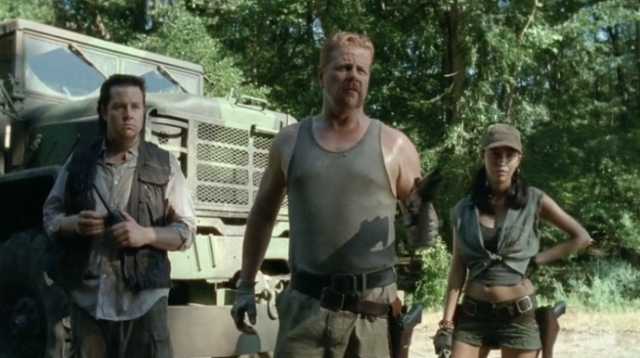 Weird cliffhanger aside, this episode was all right. Nobody got as strong or as interesting an arc as Michonne and Carl did last time, and the constant “but how do you KNOW they’re alive” got very repetitive, but I appreciated seeing the characters we’ve come to care about interact with one another in new ways. It did sort of fall back into that tired Walking Dead formula of moving different characters around like they’re chess pieces that need to be in specific places though, which I could have done without. But I haven’t completely given up all my faith in the show yet. Guess Hershel’s blind optimism got to me after all.