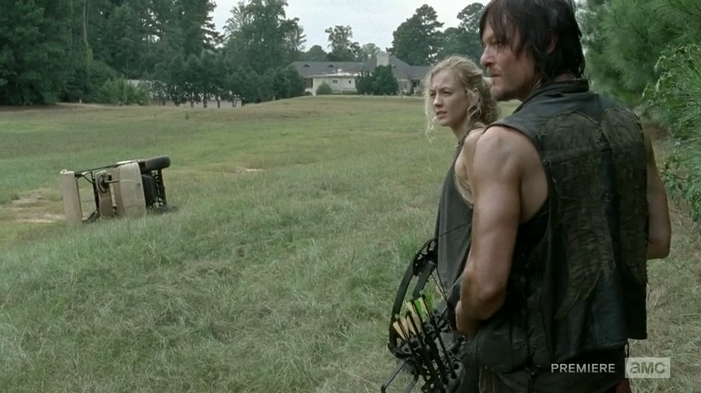 Last time on The Walking Dead: Michonne and Carl bonded about dead babies they know. Glenn and Tara met a bunch of weirdos on the road, and now they all have to play babysitter to an incredibly stupid scientist. Everyone else is scattered all over the place.

It’s nighttime, and Beth and Daryl are running through the forest being chased by walkers. They find an abandoned car and jump into the trunk together, leaving it open a crack so Daryl can stick his crossbow out just in case. Oh! And also now it’s thundering. This is basically like the beginning to The Emperor’s New Groove, but about a million times worse. They’re both still alive, though, so at least there’s a bright side.

After grabbing a bunch of odds and ends from the car, they make for the forest again, where Daryl attempts to kill them a squirrel to eat like the hillbilly stereotype he is. It doesn’t work out so well, and he breaks an arrow in the process. He does manage to kill a snake instead, and the two eat it over a fire that Beth makes with the car mirror they’ve scavenged.

“I need a drink,” Beth says. She means alcohol, because apparently she’s never tried it. Girl, I know you are lying: nobody who’s never had a drink before ever has that powerful a desire for one, even in the middle of a zombie apocalypse. Daryl doesn’t respond, so she decides to wander off for no discernible reason. Then, a bunch of walkers come after her because of course they do, and she does a pretty successful job of leading them away before Daryl finds her and drags her back to their “suck-ass camp.”

Beth, realizing the foolishness of her actions and the overwhelmingly negative effect that her grief must be having on her thought process, calmly and rationally respects Daryl’s judgment and willingly returns to camp. Haha, just kidding! She flips him off before going back into the woods for her elusive drink, because everyone knows that booze grows on trees. That’s why so many alcoholics are mountaineers, right? 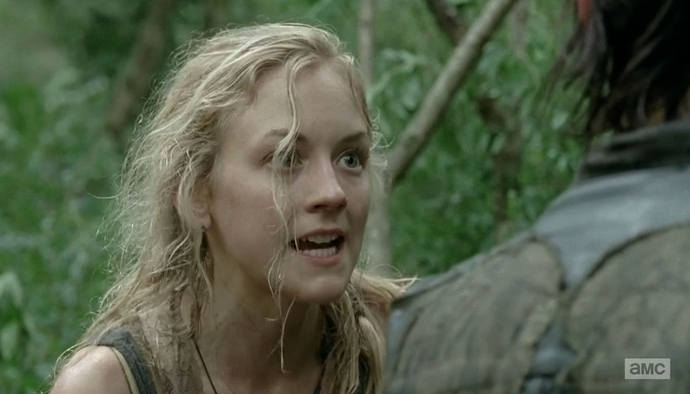 Then they come across a golf course, complete with overturned cart out front. “Golfers like to booze it up, right?” Beth asks. You know what? Never mind what I said earlier. You’ve definitely never had an actual drink before if you’re saying dumb stuff like that. The two stride confidentially past the small horde of walkers towards the back of the clubhouse and make their way through a room that most likely once held survivors, but is now full of walkers hanging from the ceiling. Their undead bodies swing helplessly toward Daryl; one of them is even wearing a string of pearls just under the noose. Yeeeesh. The floor is also littered with other dead club patrons, as well as a suitcase full of money and jewelry that Daryl greedily snaps up. Dude, did you forget that money is meaningless in a post-apocalyptic hellscape? Because just in case you did, that small horde of walkers is at the front door to remind you. Also, by “remind you,” I mean, “mindlessly feast on your entrails.”

After they remember what kind of TV show they’re on, Daryl and Beth barricade the door and make their way into the kitchen area, AKA “The Dogtrot,” according to some graffiti scribbled on the wall. Beth finds a bottle of red wine, and then promptly loses it when a walker catches her by surprise and she smashes it over the head with the bottle, which doesn’t even work. I am believing this whole “Beth’s a drink virgin” thing more and more all the time. Finally, she subdues it by jabbing its face with the broken bottle a few times until she can get to her knife for some real stabbing action. Then, she says something shitty to Daryl like “Hurrdurr thanks for nothing dickweed.” I might be paraphrasing there. “You were doing fine by yourself there, double dickweed.” Daryl says back. Again, paraphrasing.

Down in the basement, Daryl finds a broken grandfather clock and some more doors to get jump-scared behind. Upon opening door number one, they find a clubhouse gift shop filled with mannequins. Whoah, whoah, whoah. Walkers I was fine with, but mannequins? Nuh-uh, man. Too much creepy for one show. Beth’s just happy to steal some new clothes for herself, and speaking of which, I am 100% less interested in her and Daryl right now than I am in whatever the hell went down at this clubhouse. Do you see this right here? 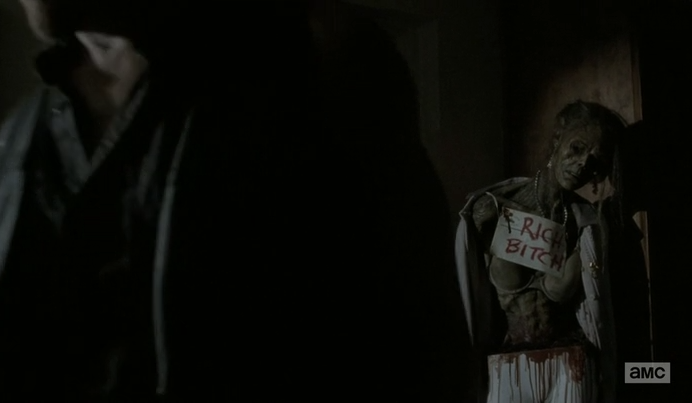 It’s a mannquin that’s been replaced from the waist up with the eviscerated torso of a female corpse. She’s been stripped to her bra and there’s a sign tacked on her that says “Rich Bitch.” Jesus Christ, I think some terrifying class warfare went down here, and I am all about learning more.

Daryl and Beth see her, too, and they’re very concerned. Beth especially, because now that she’s wearing a cream colored polo shirt and pearl-buttoned cashmere sweater, she might as well be that rich bitch. She tries to take the corpse down so she can cover her up, and after loosely protesting that she’s dead and it doesn’t matter, Daryl places a cloth over her instead. Satisfied, the two walk back out into the basement hallway, just in time for that grandfather clock to chime and attract a whole bunch of walkers their way. Beth stands back while Daryl golf clubs them all to death, because I guess she is really getting into character as the WASPy damsel in distress right about now. You know, right up until Daryl splatters some old guy’s brains all over her new white sweater.

She takes off the sweater, revealing even more blood underneath that really would not have been able to seep through in that amount of time, so boo on you for that one, costume designer. And then, they finally come across the bar! Beth goes hunting for booze while Daryl steals more stuff. Eventually, she comes across some peach schnapps. “Is it good?” she asks. “No,” Daryl says. Speak for yourself, dude. Peach schnapps is every blond eighteen year old girl’s dream.

Not to be deterred, Beth attempts to wipe blood out of a glass because JESUS CHRIST, WHY DON’T YOU JUST DRINK IT OUT OF THE BOTTLE, GIRL? That is DISGUSTING. Meanwhile, Darryl is playing darts with some heads. You guys think maybe he knows something about this clubhouse, guys? Maybe someone in his family worked here once upon a time? Or you do think it’s just a general hatred of rich people that’s got him all worked up? And then Beth starts crying, because I imagine she expected her first drink to be much different than this before the Turn, and Daryl grabs the bottle from her and smashes it to the ground. “Ain’t gonna have your first drink be no damned peach schnapps,” he says. Hooray?  And they leave.

Daryl leads Beth to a building that he and Michonne found last season, calling it better than a liquor store. Why? Because it’s full of moonshine, of course! He hands her a box full of mason jars, and they take it inside, where he pours it into a non-bloodstained glass. Hesitant, Beth says that Hershel once told her bad moonshine would make her go blind. “Nothin’ worth seein’ out there aymore, anyway,” Daryl retorts. Fair cop. She takes a sip and calls it the most disgusting thing she’s ever tasted, but she finishes it. She offers him some, but he’s claimed designated zombie killer for the night and tells her to drink plenty of water instead.

Then Beth finds this: 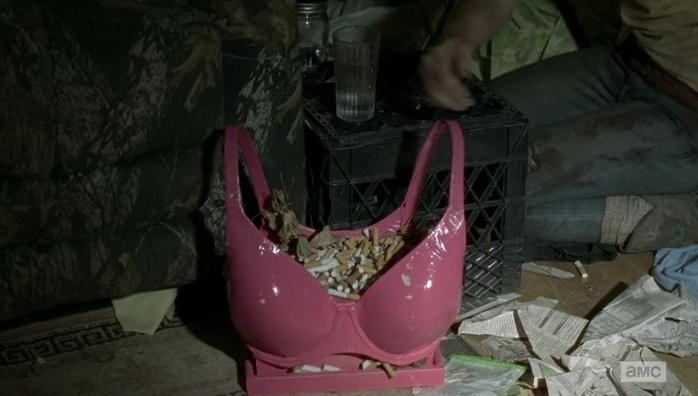 Yup, that’s right. A hot pink brassiere-shaped cigarette ashtray. “Who would buy this?” she asked. “My dad did, that’s who,” Daryl replies. Wait. Is this his moonshine hut? Are we getting a dead baby moment from Daryl? Oh sure, he says his dad had a place like this, but I know what you’re really getting at, Dixon. So does Beth, who finally convinces him to take a swill. “Home sweet home,” he says.

Smash cut to Beth and Daryl playing “Never Have I Ever.” Hooray! Next I want them to start shout-singing “A Pirate’s Life For Me,” and setting fire to palm trees. Here are the things we learn about Daryl: he’s never been out of Georgia, he’s never been on vacation, he’s never been to jail, and he was never a prison guard. Daryl becomes uncomfortable with all the questions and starts getting loud and belligerent, berating Beth for all the things that middle class teenage girls got to do that he didn’t and finally ending by proclaiming that he never tried to slit his wrists to get attention. And then, he grabs Beth’s arm and drags her outside, saying he’s going to teach her how to shoot a crossbow—by using the walker outside as target practice, because it’s “fun.” Yikes. Remind me why Daryl is a fan favorite again? He’s giving off some major “abusive husband” vibes right now. 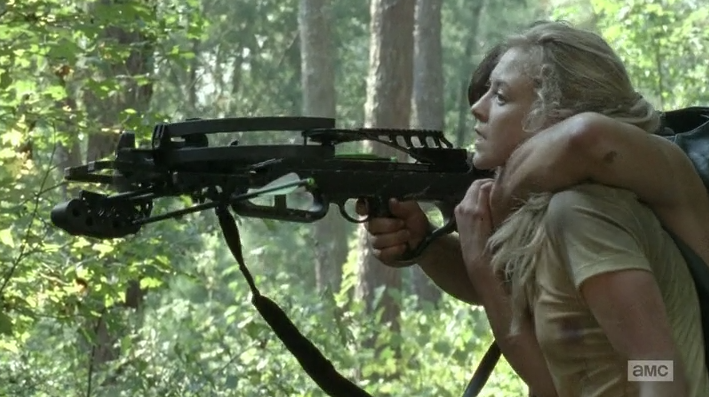 Beth pulls away, puts the walker out of its misery with her knife, and promptly calls Daryl out on what a jackass he’s being. “Stop acting like you don’t give a crap about anything, like nothing we went through matters! Like none of the people we lost meant anything to you! It’s bullshit!” And then she says that she knows he looks at her and sees another dead girl, because she’s not strong and tough in the way that Michonne or Carol were.

And then Daryl flips it back on her, pointing out that she’s lost two boyfriends and her entire family, and all she can do is go out looking for a drink like “some dumb college bitch.” And one by one, he starts blaming himself for everyone the Governor managed to kill before they got away, and finally he breaks down. Okay, fan favorite status securely back in place, Daryl.

Nightfall. Beth starts talking about how she understands why her father gave up drinking—it feels too good. Daryl admits that before the Turn, he was just drifting around with Merle, doing whatever he said they’d be doing that day, “Just some redneck asshole with an even bigger asshole for a brother.” Beth brings up all the people in she’s lost, including her older brother Shawn, who you might remember from that one time you totally couldn’t save him in The Walking Dead video game. She says she wanted to believe that Maggie and Glenn would have a baby who’d get to grow up surrounded by family, and she starts crying into her moonshine again. But Daryl’s going to be the last man standing, she says, and he’s going to miss her when she’s gone.

And then they make out.

NOPE! No, they do not do that. Just to be clear, no making out. But they do burn down the moonshine hut and all the money Daryl stole while “Up the Wolves” by the Mountain Goats starts playing, and that’s just as good. 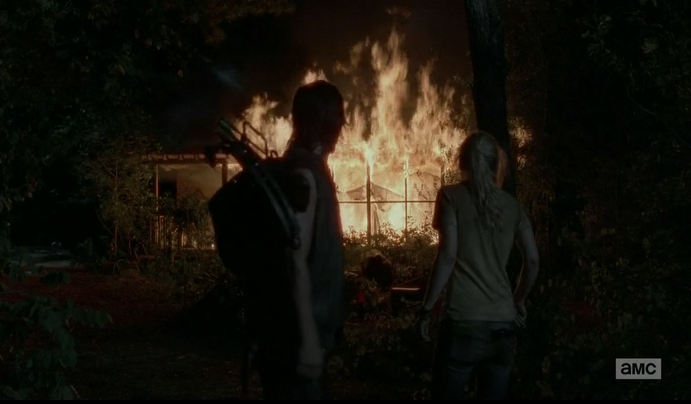 As hard as this episode was to recap (slow paced narratives make for wonderful television but are hard to make funny), it was ridiculously compelling as a character study. I’ll admit that I have to personally object to the Mountain Goats ending, because that song’s been a solid staple of my Game of Thrones-themed Spotify playlist for the better part of three years, and I refuse to associate it with any other television program. But other than that, I’ve been very, very happy with the way things have gone post-Governor.