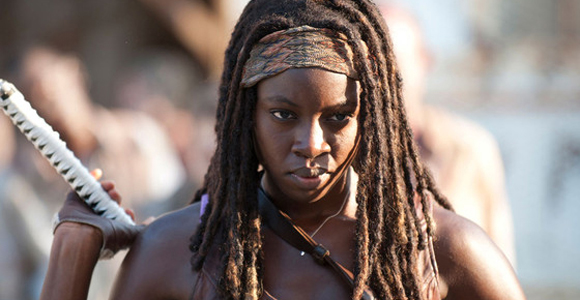 Last week’s The Walking Dead was one hell of an episode, many said the best of the series to date, so how would the next episode compare? Well, we had a bit more violence, some crying, and we got to see Michonne smile for the first time.

[Spoilers ahead!] We started with The Governor this week and an adorable family moment. I know sometimes it felt like my scalp was getting pulled off when my mom used to comb my hair but I’m sure this scene made a lot of women squirm. Surprise! The Governor’s daughter is a zombie and he’s pretending like she’s still alive!

Back at the prison, Rick completely loses it after finding out Lori died and goes on a rampage akin to Jack Torrence in The Shining. To be fair, he did a nice job of clearing out the prison, on the other hand, he’s lost his mind and we’re not sure if he’s going to get it back. Meanwhile, everyone else quickly starts planning how they’re going to feed the new addition to the family. Daryl and Maggie head out on his motorcycle to scout for formula and Glenn goes to work digging…three graves?

Hold up a second.

Last week T-Dog sacrificed his already lost self to let Carol escape a few zombies. The group found her head scarf and, while a lot was happening, no one looked for her. I assumed that would happen this week. Nope. No one mentioned Carol until 3/4 of the way through the episode and although no one has found a body or actually said she’s dead, they dug a grave for her and filled it in? This comes amidst Glenn and Hershel talking about how important they all are to each other so it totally makes sense. There’s apparently more to come though since they mention her in the preview for next week.

Anyway, Daryl and Maggie have a fairly uneventful trip out for the formula and Carl counts down the list of their dead friends as possible baby names!

Michonne is getting extra curious in Woodbury and decides to sneak into The Governor’s apartment to steal her katana back and do a little snooping. She reads his diary only to discover he too has gone off into Jack Torence territory and has pages and pages of nothing but slashes. She has to duck out when The Governor and his cronies return and finds herself in what appears to be the set of American Gladiators. A group of walkers are locked in a cage and because she’s been so bored lately, she let’s them out. And it’s pure joy seeing her work.

She’s caught after slicing the last walker up and The Governor still tries to sweet talk her into staying. Andrea is already loving having ice cubes again so she tries to convince Michonne to stay as well but Michonne has a bad feeling and decides she’s better off on her own anyway. That leaves Andrea to discover what the gladiator pit is for – fights between humans, surrounded by chained up walkers, for the entertainment of Woodbury residents. Andrea, “I’ve made a huge mistake.”

We end the episode with what appears to be Rick finding the boiler room where Lori had the baby but I’m not entirely sure. There’s blood smears on the floor as well as what looks like Maggie’s knife but instead of finding a zombie Lori, which would have been terrible depressing/amazing, he finds some beer bellied zombie dude and proceeds to shoot it in the head and stab it repeatedly in the stomach (did it eat ALL of Lori?). And then a phone rings.

This episode would have ranked higher in my mind if it hadn’t followed last week’s amazing entry but it was a good one for sure. Michonne was absolutely the star of this episode and I hope we get to see her kicking more ass soon. Rick staying bonkers will be hard to watch so I hope something knocks him out of it soon. And for the love of god, someone find Carol so she doesn’t meet the same fate as her daughter.