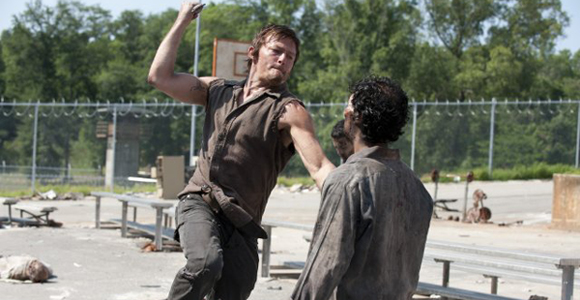 Well now, that was certainly an episode…

I wasn’t too fond of last week’s episode but what it lacked, they certainly made up for this week. [Spoilers ahead!]

We began with some shady happenings by persons unknown that had to do with zombies and a dead deer. But all that was quickly forgotten as Maggie and Glenn were having a lot of sex. I don’t blame them, there’s really nothing else to do. Meanwhile, the rest of the crew try and set up the exterior of the prison for a quick getaway should they need it. The two remaining prisoners show up and insist they can’t stay in that cell block a minute longer but Rick is insistent on them staying separate. T-Dog seems to be the only one who believes they could be valuable members of the group but he’s quickly overruled and they’re given the choice to leave the prison with a week’s worth of supplies instead.

Over in Woodbury (yes, we got to see both groups this week), Michonne inspects the town’s new army surplus and notices a few things are off. She knows The Governor is lying but he’s too busy trying to talk up her mad skillz to notice. Andrea decides to give Merle a lead on his brother’s whereabouts and he promptly tries to get in her pants. He’s keen to get on the road though but there’s one catch, The Governor won’t let him go. Although he tells him no in the nicest way possible.

All seems swell at the prison, they’re collecting wood to burn all the corpses and Hershel is making strides using crutches to get around, when oops, zombies appear inside the gates. No one knows how it happened but they quickly start popping off head shots. They’ve all gotten really good at this by the way. But it’s not just a few walkers, it’s a lot, and the crew scatters to find a safe spot from which to fight from. Unfortunately, they’re inside the prison doors as well. T-Dog and Carol take off in one direction, Hershel and Beth another. Together, Maggie, Carl, and Lori find themselves in the boiler room and of course, Lori goes into labor.

Now here’s where things get really bad. And by bad I mean, Carl gets a quick anatomy lesson. From his mom.

Lori immediately starts having complications with the labor and unfortunately, Maggie isn’t the one who trained  to help in this particular situation. Lori quickly realizes her time has come, she wants the baby to survive and the only way for that to happen is if Maggie performs a C-section. Considering how annoyed I’ve been with Lori for a while, this part got me misty. She says her goodbyes to Carl, tells him to take care of his father and new baby brother or sister and…Maggie cuts open her stomach. Lori passes out rather fast and Carl makes the executive decision to be the one to shoot her in the head.

As if that wasn’t bad enough, T-Dog gets bit to shreds by a walker in the midst of the attack and considering he knows his fate, gives Carol a chance to escape by storming towards a few zombies blocking their path. A moment of silence for T-Dog, please. So, how did this all start? Remember that prisoner Rick left for dead? He managed to survive and planned this whole thing to take back the prison. He fails miserably when prisoner Oscar shoots him in the head to save Rick. Guess they’ve got their new token black guy now. Seriously, that’s all I could think during that scene and that sucks.

This was one of my favorite episodes of the series so far, lots of action, and certainly lots of drama. Rick’s reaction when he sees Maggie and Carl emerge with the baby but no Lori was one of the most heart-wrenching things I’ve ever had to watch. If I had one bone to pick with this episode it would be that they didn’t allow The Governor to do anything evil. After the disturbing reveal last week, it seemed odd they would act as if nothing happened. I kept expecting him to shout “boo!” at any second. Did he poison Andrea’s whisky? Was someone waiting outside that door to block her path? Was The Governor going to grab her hair and yank her back in? No to all of those. I’m sure they’re not ready to reveal him as evil to our main cast just yet but it would have been nice to see another small aspect of his wicked ways.

Previously in this season’s recaps, I haven’t delved into the many differences between the TV show and the comic book for the sake of those who haven’t yet read it but I feel I have to here. I’m ok with how Lori went out but not that her and Rick didn’t have a reconciliation. I feel like we were a bit cheated there. But the thing that bugs me the most is Carl. In the comics, he’s the one shining beacon of innocence in the series. While everyone else is concerned with living from day to day, he’s playing husband and wife with Sophia. It’s one thing missing from the television series in my mind, a sense of hope. My only explanation is the young actor who plays Carl couldn’t stay young forever. In the comic, he’s still a little child when they reach the prison but the actor is growing up so the character must as well. I just wish everyone didn’t have to be so hard and jaded. It makes for a very depressing show.