The Walking Dead Recap: Talk With Me 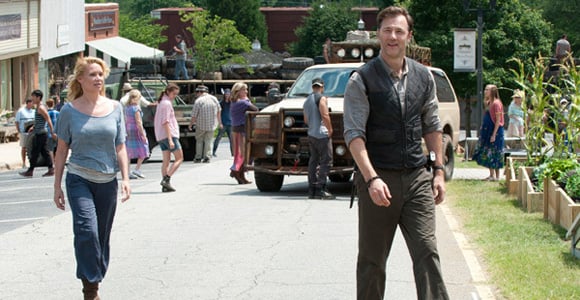 I thought the last episode of The Walking Dead was shocking to say the least and I was curious to see where the survivors would go next. Unfortunately, we’ll have to wait another week. This episode was all about Andrea, Michonne, and newbie, The Governor.

The episode was titled “Walk with Me” but should have been called “Talk with Me” or, “Hangout with Me” because that’s really what happened.

Andrea and Michonne witness the crash of a helicopter. Before they get a chance to investigate the crash site, they realize someone else is coming to check it out. They hide in the brush until they can figure out whether these new folks are friendly or not. Turns out the crash involved military personnel and only one of them survived. This new group makes sure to re-kill the dead men before they can turn into zombies and all seems good but the ladies don’t feel comfortable revealing themselves. Too bad Michonne’s zombie pets basically did that for them. She beheads them to stop their noise but it’s too late, Merle finds them and it’s reunion time!

The two are blindfolded and taken to the group’s camp, which is actually a nice quiet town complete with electricity, running water, and a doctor. Andrea gets the medical attention she’s been lacking but is adamant about being let go. The group’s leader, The Governor, insists they aren’t being held captive. Andrea and Michonne still think otherwise. Perhaps it’s the armed guards watching their every move? Or Merle shaking his stabby hand at them. Though Andrea should be somewhat understanding considering the wary mindset of her group of survivors when it came to new people.

The Governor gives them a small bit of information about their community; strict curfew, everyone has a job to do, children go to school, etc. and then everyone walks around for a while. Literally. Andrea and Michonne walk around probably 50 square feet of the town, chat with one other person who lives there and that’s it. To be fair, we see a bit more from The Governor’s perspective. He’s got a scientist studying walkers, or “lurkers” as they’re calling them, and making tea. How cozy.

Besides the mundane life of quiet Woodbury, we get to see The Governor take a field trip to find the other military folks the lone survivor of the helicopter crash informed him of. He drives up waving a white flag but proceeds to take the entire team out with his boys hidden in the surrounding field. And not one of The Governor’s men got shot. Even though these were trained military men holding their guns at the ready. And why did he kill them at all? I’m sure we’ll learn more soon because as it turns out, this Governor guy isn’t so nice. In fact, he’s kind of a psychopath. The end of the episode gives us a look at his secret room. And what does the secret room hold? An aquarium of severed heads. Some zombies, some not as we see the lone survivor of the helicopter crash as a new addition.

But honestly, besides that very last scene, this episode bored the hell out of me. After two episodes of some pretty great action and gore, the show has reverted to The Talking Dead form. And it wasn’t even particularly good or informative talking. I also have to point out that split groups are one of the worst things to do to a television show. Inevitable you wind up showing one more than the other (or one not at all as was the case this episode) and fans will start to pick favorites. Once they do that, the switchovers become utterly painful to sit through.