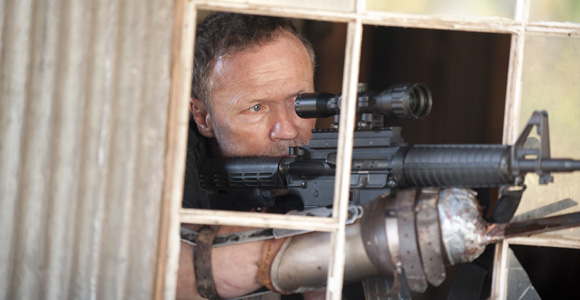 I would just like to point out this is the third week in a row I’ve used a picture of someone from The Walking Dead looking through a window. (Last week, the week before.) Ok, moving on.

A couple weeks ago I mentioned I wasn’t sure where the last few episodes were going to take us considering all we were waiting for was the big confrontation between Woodbury and the prison. We had to sit through a whole lot of exposition in “This Sorrowful Life” but luckily it paid off in the end.

It’s a little jarring when an episode picks up and you realize decisions have been made the audience didn’t get to witness. For instance, last week we left Rick asking Hershel to talk him out of giving Michonne over to The Governor. This week he’s already in the midst of how to do it and while we can see Hershel is uncomfortable, we never hear him provide the cons. Rick includes Daryl in the plans and does the same with Merle after finding him searching for drugs in the mattresses of the prison.

Some preparations are going on at the prison in case Woodbury attacks again and in the midst of all that, Glenn asks Hershel’s permission to propose to Maggie.  I just assumed he’d go and ask her after that but no, he went and search for a walker with an engagment ring and cut off her finger to get it. How romantic! Glenn and Maggie proceed to have the most casual proposal ever – he places the ring in her palm and she says yes.

I’m skimming over most of the other little chunks of this episodes because really, the fun didn’t start until Merle went sort of rogue and kidnapped Michonne without waiting for his brother or Rick. With her hands bound he starts walking her to the meeting point with Woodbury and while we’ve come to expect Michonne to be rather violent and wild, she seems oddly cool and collected. Perhaps because she’s already assumed she’s going to be able to get out of this.

It’s not easy, though. Along the way Merle and Michonne encounter several walkers which the former easily dispatches with both her sword and his knife-hand. But they run into some trouble when Merle decides they’d be better off hotwiring a car. Leaving Michonne tied to a pole, he goes to work, only to set off the car’s alarm and alerting several walkers to their location. It’s here Michonne might have won best walker kill of the entire series. Merle had her tied with wire and when a walker gets too close, she runs around it, trapping it in the wire and pulls until she severs the head. It was pretty sweet.

They eventually head off but have a serious heart to heart in the car in which Michonne tells Merle he’s not actually as bad as he thinks he is. He admits to having killed 16 people since the apocalypse to which asks if he killed anyone before. No, he hasn’t, and he didn’t kill anyone before he met The Governor either. I think Merle was already on the road to redemption but Michonne pushed him over the edge. He lets her go and sets off on his own journey.

And his journey? Well, it’s getting drunk and taking sweet revenge on The Governor. In what also may be another series best, Merle pulls a classic prank on some walkers (with good reason). He blasts the car radio and drives off every time they catch up to him. Like your asshole friend who says “get in” but drives off every time you reach for the handle. His goal was to lead them to the Woodbury meet in the hopes they would cause a bit more havoc. He hides himself in one of the abandoned buildings and when The Governor and crew arrives he starts picking them off one by one.

Unfortunately, a stray walker causes Merle to be found out and The Governor himself pops in for a face to face. The two fight rather brutally but The Governor wins out because he’s completely bonkers and bites off two of Merle’s fingers. Merle realizes he’s done for but doesn’t want to give The Governor the satisfaction. But he’s had enough and shoots Merle instead of bothering with torture.

This scene was intense, and a welcome addition to the show but it was what followed that really brought it home. Daryl had been tracking his brother and comes upon the battlefield a while after Woodbury had gone. Merle has turned into a walker (a bit too decomposed for a fresh one if you ask me) and is chowing down on one of the fresh kills. Daryl breaks down and keeps shoving his brother back, hoping to delay the inevitable, but finally puts Merle down for good.

Oh and yeah, Rick realizes he was being a terrible human being by even considering giving Michonne up, gives a heartfelt speech to the prison crew, and then realizes he better have a good apology ready when he sees Michonne heading back to the prison alone.

While this episode went in another direction to tell another story, it was a little frustrating not seeing Andrea at all considering how she was left in last week’s episode. But Merle’s character got a chance at a satisfying story arc and the creators did not disappoint. I’m still disappointed in Rick’s decision making skills, and intelligence for that matter, especially when you consider he and Michonne totally bonded recently and he still decided to give her up to save the group. Here’s hoping this week was a turning point for him. Now who gets the honor of killing The Governor next week in the finale?