The Walking Dead Recap: Daryl in the Doorpost | The Mary Sue

The Walking Dead Recap: Daryl in the Doorpost 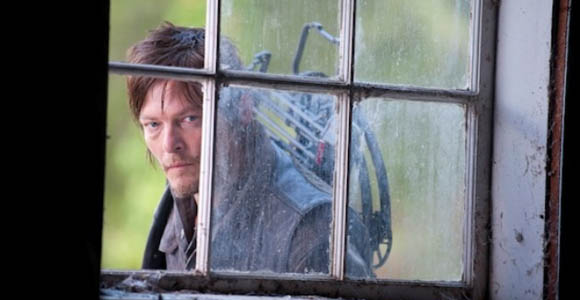 The Walking Dead had a lot to live up to after last week’s standout episode. Did they keep up the momentum or drop the ball?

“Arrow on the Doorpost” was an interesting title which, I think, makes no reference to anything that actually happened in the episode. Unless we’re calling Daryl Arrow now, in which case, I think The CW might take issue.

It’s tough knowing there are three episodes left in the season. Theoretically, that means nothing that exciting is going to happen between now and then. And by exciting I mean The Governor getting what’s coming to him. But that doesn’t mean this episode lacked for entertainment. What we got was an old-fashioned sit down. The Governor and Rick agree to talk on Andrea’s request and met in a barn. But The Governor changed things up a bit and not only arrive early but strapped a gun to their meeting table and brought some alcohol. A gun that was never touched.

Andrea tries to act as mediator, but The Governor throws her out and she goes without a fight. Andrea better redeem herself by the end of the season and in a big way. This behavior is exhausting to watch especially as someone who’s read the comics and knows her true potential.

Outside, Hershel and Daryl get to meet a few members of the Woodbury crew, namely Martinez and Milton. At first the exchanges are tense with quite a few harsh phrases being thrown back and forth but eventually, and surprisingly, they start to bond. Daryl, Martinez, and Andrea have to take out a few walkers and the guys have a serious moment. I was wondering if this was going to turn into a fake out situation but Martinez seemed genuine. It’s interesting to know that even one of The Governor’s toughest soldiers has doubts about his intentions. In the meantime, Hershel and Milton have a hilarious conversation about Hershel’s amputation which is something I never thought I’d write.

Back in the barn, things aren’t going so well. Rick had a plan to separate their territory so they never have to cross paths and The Governor is basically like, “LOL, I do what I want!” The dynamic here was interesting to watch though. Rick tried to put on his tough guy routine but you could see his fear showing through and The Governor had the upper hand no matter how hard Rick tried because, well, Rich has real emotions. The Governor did share part of his life before the apocalypse, a touching story of his wife’s death, but it was still meant to throw Rick off his game. It took a while but he finally revealed his hand, he’ll spare Rick’s group if Rick hands him Michonne so he can take his revenge.

Back at the prison, Merle is getting antsy about his brother being in such a vulnerable position. He suggests they leave and take out The Governor when he’s not expecting it but Glenn takes a major leadership position and physically forces him to stay with some help from Maggie and Michonne. This winds up giving us a great Maggie/Glenn scene later on when the two makeup. Though Glenn not wanting to have sex in front of the zombies at the gate just reminded me they should be killing the zombies at the gate.

We see The Governor lie about his intentions back at Woodbury and when Rick arrives back at the prison, he chooses to lie to the group and tell them The Governor wants their home. They have their reasons but Rick’s is more veiled then first appeared. Yes, he wants his people to be scared and ready for the worst but he’s also trying to cover for the fact that he’s actually considering The Governor’s proposal, something I thought he could see through. At least he let’s Hershel in on it, the one person (besides Carl?) who can convince him it’s a stupid, terrible thing to do.

Sitting down the two leaders allowed the audience to see how similiar yet different they are. The Governor and Rick may have some shared goals but at the heart of things, The Governor  is a psychopath and Rick is a regular guy with some serious issues. Rick may do some questionable things but he still has a conscience and that makes all the difference. The Governor is playing dirty and Rick still has enough humanity left not to realize it. It was disappointing to see Andrea choose to go back to Woodbury even though she’s clearly freaked out by The Governor and had a great chance to leave him. Like I said, I hope she is able to redeem herself by the end of the season because, I swear, she’s a great character, instead of going out in a blaze of glory. Or blaze of gory, as the case may be.