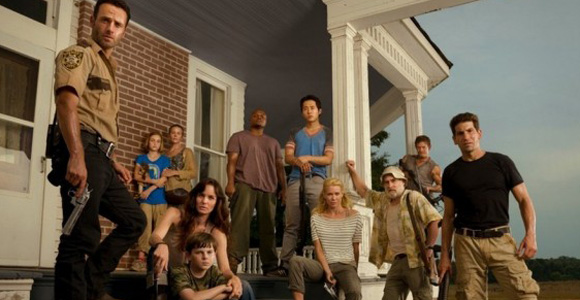 Last week we brought you a new type of recap for AMC’s The Walking Dead. Sarah, as usual, talked about how she thought the episode went but we also added a second commentary from our own Jill Pantozzi as someone who’s read the comic (and is particular about the differences between the two). Read on for spoiler-filled discussion about this week’s equally explosive happenings from both ladies!

First, our regular recap from Sarah!

Oh boy, oh boy. This episode was comparatively action-packed! The dullest part of the hour was at the beginning, when the denizens of the farm held a funeral for Dale, scored by a ponderous speech from Rick about Dale’s fundamental human decency. At one point he intoned “I’d look at Dale; he’d be looking back at me with that look he had,” which made absolutely no sense, but everyone at the funeral seemed very affected.

Everyone seemed to agree that life could not continue as usual on the farm, but rather than LEAVING THE FARM the group ran around making mini-bunkers all over the property, which doesn’t seem like much of an improvement. Maggie offered her room to Glenn to store his stuff, but he refused and acted very weird in doing so, all shifty-eyed and “isn’t your dad going to be around?” I thought Herschel’s watch was basically Maggie’s dowry last week! Wouldn’t he be totally cool with this?

This week the consensus was to take Randall out into the woods and let him go, but before anyone could do that Shane freed him and took him into the forest himself. They had a conversation that suggested that Shane was going to defect and join Randall’s band of not-so-merry men, but instead Shane seemingly clocked him in the head (this action was obscured by a tree, which was very coy for a program that routinely shows us zombies taking pitchforks to the face) and left him for dead, stopping to make out with a tree so it looked like Randall got the drop on him. Shane went back to the group and told them this story, and they were suspicious but joined him in the woods anyway to hunt down Randall, who is a walker now! Oh no! Glen and Daryl brought him down but noted that there were no zombie bites on his body, that a broken neck was his initial cause of death. “How is that possible?” Glen asked. Goood question. I’ve only been around for a few weeks and already I can’t keep any of the zombie mythology straight.

So. Why did Shane melt down so intensely? It may have had something to do with a conversation he had with Lori, during which she thanked him for protecting her and then told him that she doesn’t know if she’s pregnant with his baby or Rick’s. Lori! What good did this do? Zero good, because Shane turned instantly crazy. Carl confessed last week’s encounter with a walker to him, and Shane immediately tattled on him to Rick. Rick took his son aside and had a talk with him about how everyone will die — including his mother and father — and that he should start preparing himself for that.

While everyone else was hunting down zombie Randall, Shane and Rick had a standoff in an open field, when Shane drew his gun and aimed it at Rick. He told him that he doesn’t think Rick can protect his “broken woman” (buuuurn) or his “weak boy,” and therefore he must die. Again. Rick drew his own weapon and then begged Shane to lower his, pleading with him to end the standoff and go back to the farm now, while “nothing’s happened yet.” Shane seemed receptive to this idea and Rick drew him in for what looked like a manly embrace, except it wasn’t not an embrace at all! It was a trap! He stabbed him in the chest, weeping all the while, screaming “Damn you for making me do this…this was you, not me! Not me!”

As always, Carl was drawn to the sounds of death and destruction and showed up in the field while his father was kneeling over Shane’s dead body. They both hung out for a bit, perhaps anticipating what happened next, and when Shane popped up, walker-ified (has this always happened? Do people not have to be bitten by walkers anymore to turn into them?), CARL shoots him. So father and son both got to take turns killing Shane. Adorable. I hope possibly-Shane’s baby doesn’t grow up with a taste for revenge.

So — now that all dead people seem to automatically turn into walkers, what does this mean for the survivors? We’ll have to wait until next week’s season finale to have that question answered (hopefully). See you then!

Grossest Moment: Probably watching Andrea put a pitch fork through a zombie’s face, although I would have to say that watching Lori stir the pot with Shane was almost as yucky to watch.

My Anxiety Level In This Episode: 10. I never thought Rick would actually kill Shane, because come on, it’s Rick, and then he TOTALLY DID! I was alone in my living room and I still yelled. 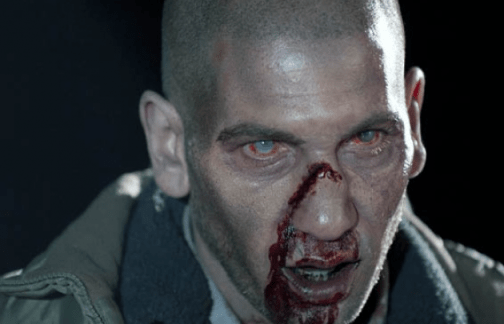 And now, a note from Jill, who’s read the comic.

I thought I was angry last week. That was nothing! This weeks diversion from the source material got me even more riled up. I’ll actually quote Sarah here, “I never thought Rick would actually kill Shane, because come on, it’s Rick.”

EXACTLY! I know some people aren’t bothered by the change, but to me, this is huge and horrible. In the comic, there’s a confrontation between Rick and Shane in which Shane points his gun at Rick. That’s when Carl, who had followed them and realized Shane was about to kill his father, shot Shane in the neck, killing him. Shane. Not Zombie Shane. Human, alive, Shane.

Yes, it was shocking, yes, it was brutal, but that’s what The Walking Dead is at its core. To take away that moment really waters the story down for me and it honestly feels like a cop out on the network’s part. (Topless Robot named it one of the moments they didn’t believe would make it to television.) Which, believe me, I completely understand. Having a child murder someone is huge but having a child kill a walker is just lame. And having Rick bear this new burden is a wrong turn in my book.

Writer of the comic, Robert Kirkman, once again spoke to the Hollywood Reporter after the episode and explained the plot choices. “In the writers’ room, we felt Rick was passive at times and wasn’t handling things himself. So to end this season with Carl killing Shane for Rick would have been a misstep,” he said. “It was very important to us in the development of Carl as a character to have him have a hand in it. That’s how we came upon the idea of, in a sense, both of them killing Shane.”

I feel like a jerk for saying this but, who’s fault is it Rick became so passive during the series so far? That was the writers’ decision. Kirkman also addressed the comic differences.

“Staying true to the comic and adapting things as closely as we can when it fits and when it feels necessary is something that’s very important to me. I talk a lot about the different changes in the show and how I like and I support them and how some are actually my suggestion,” he said. “That does sometimes scare fans and they’re like, ‘What are they doing, he’s changing too much.’ But it is something of a balancing act. When we can stick a little closer to the comics it is something I’m very supportive of. I think this is a scene that kind of straddles the line in a cool way.”

Well, I for one, don’t think it was cool. I said last night on Twitter, sometimes it sucks to love stuff. I’m extremely attached and passionate about The Walking Dead comics and while I understand the need to liven things up and make a few different choices as far as story beats go, this particular change almost makes me want to stop watching the show. And for the most part, I have really, really enjoyed the show so that’s saying a lot. I’ll watch the finale and contemplate things after that but with this change I’m questioning other major things in the story. Because when you think about it, Carl shooting Shane in the comic was a big deal but there are far worse things coming up in the story. So if they shied away from this, they’re going to likely do the same with the others later. Will they even go to the prison? We know they’ve cast the Governor, are they going to skip right to that part of the books and then cut out all the really juicy bits? We shall have to wait and see. All I know is, they better not screw with Michonne…