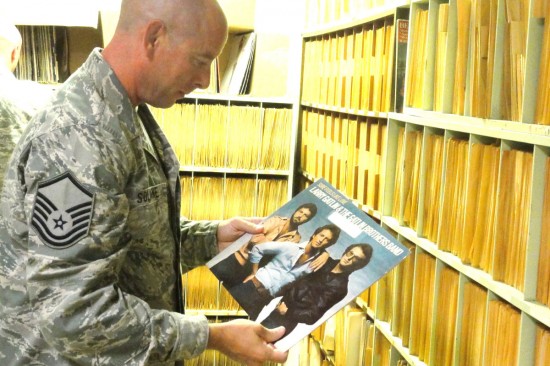 Wake Island Air Force base is located some 2,000 miles east of Japan and 2,000 miles west of Hawaii, putting it smack dab in the middle of the Pacific. During some recent renovations on the base, someone opened a door marked with a restricted area sign and made a startling discovery: A cache of over 9,000 carefully organized and cataloged vinyl records. Amazingly, the extensive collection has been valued at between $90,000 and $250,000.

The records weren’t left there by chance. At one point, the room supplied the music for the now-defunct KEAD radio station on the base and regularly received music from the American Forces Radio and Television Service (AFRTS). Though the exact history of the radio station is lost, from the titles in the collection it’s thought to have operated during the 1960’s and then shut down sometime during the 1970’s after the introduction of satellite radio. At some point, the records were intended to be returned to the AFRTS, but for some reason that didn’t happen. According to the Air Force, the remote nature of the base likely made returning the records logistically difficult.

There’s no word on what the collection contains, however, this post from a ham radio enthusiast website mentions that the station’s operators tried to run a lot of “top 40” material, as well as some recorded comedy routines. Despite its ubiquity in record collections everywhere, the Wake Island collection probably does not include Kenny Roger’s 1978 classic “The Gambler.” Unfortunately.

Now that the records have been recovered, the Air Force plans on spending some $10,000 to have it shipped back to AFRTS’s museum in Virginia. Any gaps in the AFRTS collection will be filled in with the newly recovered vinyl, and the rest sent to the National Archives. Unfortunately for vinyl enthusiasts, these wax discs will probably not see the open market.

(image and story via US Air Force via Boing Boing)