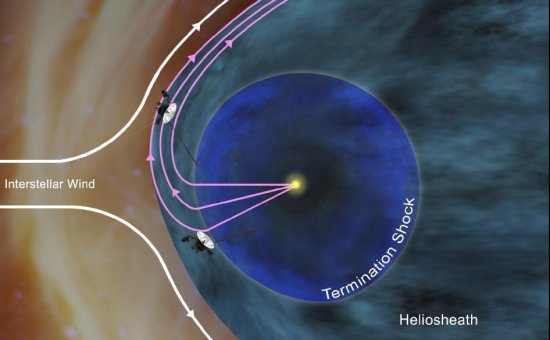 We got ourselves all excited for NASA’s Mars press conference today, even though we already knew it wasn’t about life on the red planet, but what we should have been paying attention to was happening nearly 11.5 billion miles away in the heliosphere. The Voyager 1 spacecraft has encountered a new region of our solar system. What’s even more exciting is that NASA scientists believe this region is the final barrier between Voyager and interstellar space. That’s so much more impressive than chlorine on Mars.

The Voyager 1 spacecraft is now so far out into space that light from the Sun takes over 34 hours to reach it. NASA debated whether this new region should still be considered part of our solar system, but project scientist Edward Stone makes the call by saying, “Although Voyager 1 still is inside the sun’s environment, we now can taste what it’s like on the outside because the particles are zipping in and out on this magnetic highway.”

The highway Stone is referring to is this new region where low-energy particles from within the heliosphere can leave the solar system and high-energy particles from outside the solar system can enter. The principal investigator of the low-energy charged particle instrument, Stamatios Krimigis said that if the call were based solely on the particle data, he would have believed Voyager had made it outside the heliosphere, but adds, “we need to look at what all the instruments are telling us.”

The other instruments measure things like the magnetic field in the region, which point to Voyager still being within the Sun’s environment. NASA scientists are looking for a distinct change in direction of these magnetic fields to indicate that the spacecraft has left the solar system and entered interstellar space.

We’d like to remind you that this is happening 11.5 billion miles away, to a spacecraft that was launched 35 years ago. How great is science?

You can find other interesting data about the Voyager probes here.