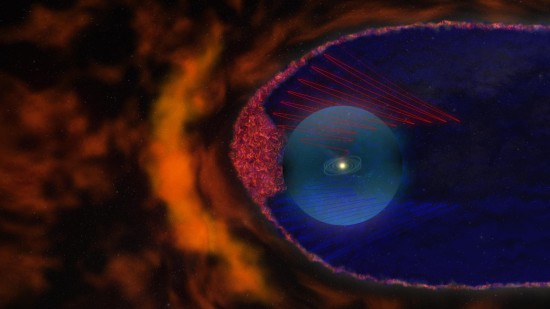 The Voyager missions have yielded many surprising discoveries about our solar system and, despite being 9 billion miles away from Earth, the data continues to pour in. Now, scientists at NASA are saying that they have made sense of some surprising readings from the spacecraft over the past few years. Their data indicates that the edge of the solar system is a frothy stew of magnetic bubbles.

For years it was assumed that the heliosheath, the outer limit of our sun’s magnetic field and the boarder of galactic space, was composed of graceful arcs of magnetic energy that curved back toward the sun. The reality is far less neat and tidy. Instead of arcs, the magnetic field is broken into a membrane of distinct bubbles, each about 100 million miles wide. The whole mix is also apparently writhing around, its movement being compared to bubbles from a jacuzzi jet.

Don’t worry, if none of this makes any sense, there’s a soothing and explanatory video at the end of this post. With pictures!

While it was a surprising discovery, scientists believe they understand how this bubbly barrier came to be. Because the sun’s spin has wobble to it, its magnetic field is twisted into ripples. At the edge of the solar system, those ripples bunch together and eventually split into massive magnetic bubbles.

With a working hypothesis about the nature of the bubbles, the next question is how this discovery changes our understanding of the solar system’s interaction with the rest of the galaxy. For instance, our solar system is constantly bombarded with high-energy cosmic rays spewed out from other celestial bodies. The sun’s magnetic field helps to deflect most of these away from us, but how the rays interact with the bubbles is still unknown.

Though the Voyager probes are moving at incredible speeds, it will still take them quite some time to pass through the bubbles. Hopefully this will give NASA plenty of time to investigate the froth that surrounds our solar system before the probes plunge deeper into the cosmos.