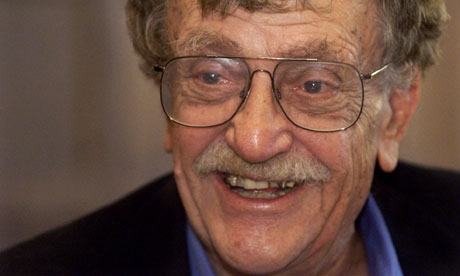 Ooh, fun, book-banning! Once again, Kurt Vonnegut’s science fiction masterpiece Slaughterhouse-Five has been banned from Republic High School in Missouri. This is far from the first time the book has been banned, or burned; schools in the U.S. have frequently struck the book from the curriculum, and removed it from the libraries, and it solidly holds its place on the American Library Association’s list of “100 Most Challenged Books of 1990-1999.” When the Vonnegut memorial library heard about this particular one, however, they reached out to the students who would be deprived of reading the book, and are providing those students with free copies of the novel.

Mark this under “Rebellion that rocks.”

To the 150 students who were originally supposed to read the book, Vonnegut Library is offering them the opportunity to exercise their First Amendment rights, saying that all the students have to do is email them with their name, address, and grade level, and they will receive a copy of the book. This was their message:

We have up to 150 books to share, thanks to the generosity of an anonymous donor. We think it’s important for everyone to have their First Amendment rights. We’re not telling you to like the book… we just want you to read it and decide for yourself. We will not share your request or any of your personal information with anyone else.

Slaughterhouse-Five is a satirical novel that tells the story of Billy Pilgrim, World War II experiences, and his travels through time. It is generally reguarded as Vonnegut’s most popular and influential work. The School Board has publicly stated their reason for banning the book, saying that it creates “false conceptions of American history and government or that teach principles contrary to Biblical morality and truth.”

This is a book that contains so much profane language, it would make a sailor blush with shame. The “f word” is plastered on almost every other page. The content ranges from naked men and women in cages together so that others can watch them having sex to God telling people that they better not mess with his loser, bum of a son, named Jesus Christ.

Is it worth mentioning that it also dissipates the “false conception of American history” that we didn’t bomb civilian targets in World War II, though an essentially autobiographical retelling of Vonnegut’s survival of the bombing of Dresden while a prisoner of war? Or that it was one of the the first literary sources to acknowledge that gays and lesbians were shipped off to Nazi camps as well as other German scapegoats? Hmmm.