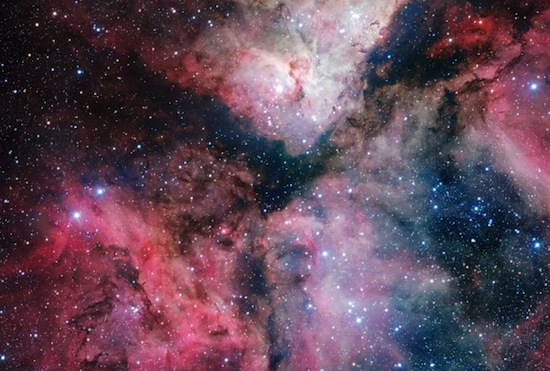 The astronomers and other fine folks at the European Southern Observatory (ESO) showed off the capabilities of their newest toy, the VLT Survey Telescope (VST) earlier this week, marking the official inauguration of the instrument with the release of an amazing new photo of the Carina Nebula.

This isn’t the Carina Nebula’s first time smiling for the camera of one of humanity’s many eyes on the sky. The nebula is not that far off in cosmic terms — a mere 7500 light years from Earth — and has been recorded by other space telescopes before. It’s that familiarity, though, that makes it a good dry run for testing out the new telescope. From our perch in front of this ridiculously clear image, everything seems to be in order — though we’re inclined to let the fine scientists at the ESO make that final determination.

The newest addition to the ESO’s remote Paranal Observatory in Chile’s Atacama desert, the VST boasts a 268-megapixel digital camera that can image a section of the night sky about as large as two full moons. That wide field of view is key to VST’s primary mission as a survey telescope, capturing wide swathes of the sky in great detail, and along visible wavelengths, rather than using more exotic techniques like infrared or radio wave imaging. It’s also the key to getting images like the one above of the entire nebula, where other telescopes have trouble capturing more than small parts of it at a time.

Considering how much we’re digging this photo, we can’t wait to see what this thing is really capable of once ESO astronomers drop the training wheels. We expect big things, VST.