Seen From Space, The Earth At Night Is Really, Really Beautiful 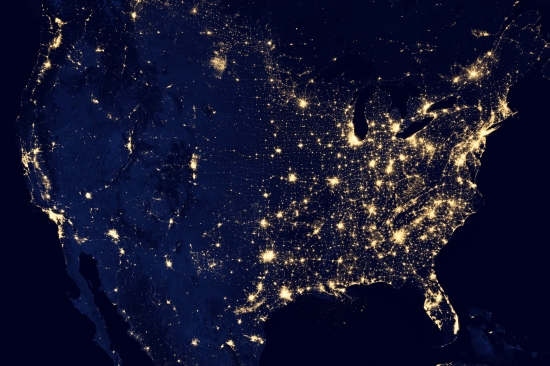 When you’re in a city and you look up at the night sky, it’s easy to be frustrated by all the lights around you, obscuring your view of gorgeous, delicious space. It turns out that looking down at cities from space at night can be beautiful too, though. This video, composed of new images from the Suomi NPP satellite, shows what the Earth looks like lit up at night, and it’s pretty amazing. Hey, I think I can see my house!

The new images were made possible by the “day-night band” of the Visible Infrared Imaging Radiometer Suite(VIIRS) aboard the Suomi NPP. It detects light in the spectrum from green to near-infrared, and can register light sources previously considered too dim, like lights from cities, wildfires, and even reflected moonlight.

The images make the cities of Earth look like collections of luminescent algae floating on the surface of the water. Particularly in the United States, you can see the interconnectedness of cities thanks to interstate highways, an imperfect grid that resembles slime mold branching out to different food sources. The images are stunning, but they’re also useful. The leader of the Earth Observation Group at NOAA’s National Geophysical Data Center, Chris Elvidge, says, “I’m always amazed at what city light images show us about human activity.”

He’s right. It can really teach us a lot. The data from the Suomi NPP can be used for a wide range of applications, from tracking fishing fleets to witnessing an increase in electric light in the hometown of a newly empowered dictator. Because that’s a thing that happens, apparently.

The images were released at the Fall Meeting of the American Geophysical Union, which has been revealing a lot of great things this week. You can see the images on NASA’s Earth Observatory site.