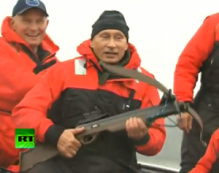 He later bragged to cameras, “”We tried to work with three or four whales, but we only got one … I had a rush: three times I missed, but the fourth time I hit it.”

Meanwhile, all of Russia is on fire.