Get Ready to Exercise, Because It Looks Like We’re Getting a Virtual Reality Treadmill

So now game lag will be both emotionally and physically exhausting! 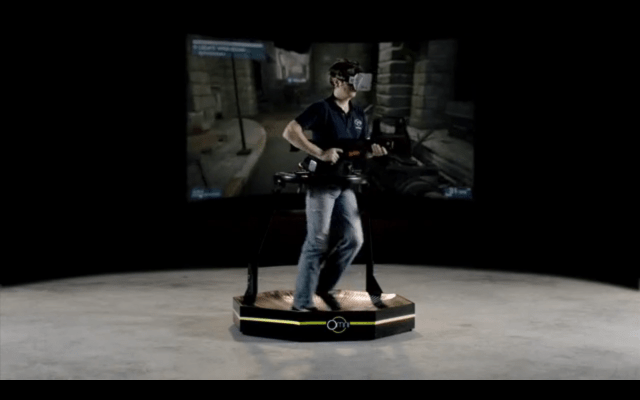 Listen, I want to get in shape as much as the next person-who-spent-all-winter-eating-giant-bags-of-Heath-bars, but not only do I live in the Cicada Belt and currently fear the buzzing, bug-filled outdoors, I also would much rather spend my time playing video games anyway. Luckily, Virtuix has found the answer to my problem — the Omni treadmill, which allows you to literally run around in your favorite game worlds. Like, with real running. You know, that thing you do when you’re about to miss the bus? Now that Virtuix’s Kickstarter campaign raised well above its goal in a matter of hours, you’ll be able to do that thing for fun.

When paired with the Oculus Rift headset, the omni-directional treadmill tracks your movements and translates them into the game seamlessly. It even tracks your distance travelled and calories burned during playtime. Currently it’s compatible with any game that’s also compatible for the Oculus, which includes Team Fortress 2 and Half-Life 2. Hope you like running around and shooting at things — wait, of course you do. Forgive me.

After two years of development, Virtuix founder Jan Goetgeluk believes that the Omni is ready to be manufactured on a wider scale and appealed to the Kickstarter community to raise the funds necessary. Their original goal was to scrounge up $150,000 in order to mass produce and ship out the first units in January 2014, but as I’m writing they’ve made upwards of $500,000 and counting. Given that their last Kickstarter raised actual millions, they’ll probably have a lot more money than they thought they needed. No telling what they’ll do with all that cash, though personally I’m hoping that they make the units cheaper. Even if I’m never able to afford it, though, the Omni’s very existence still fills me as much unattainable nerd glee as the Lord of the Rings section of SkyMall.

Even at the current reward tier price tags, the Omni is surprisingly affordable considering that is basically sci-fi technology come to life. That will probably change once these suckers get mass produced, though, so if you’re desperate for one you might want to chip into the Kickstarter before all the rewards are snatched up. Believe me, if I had $429 plus another couple hundred for shipping sitting around, it would be in Virtuix’s pocket already. Either that or I’d have spent it all on replica swords from SkyMall. I just really dig those swords, guys.

Check out the Omni in action:

(via Eurogamer, image via Kickstarter)