There Were Way More Female Vikings Than We Thought, and They Got Buried With Their Swords, Too 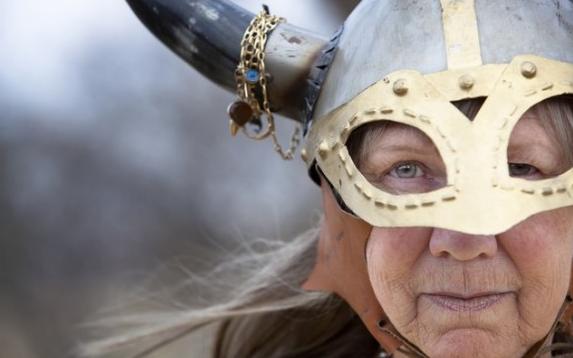 While the stereotypes of vikings usually bring about images of very large blond men who pillage and fight and all that jazz, researchers are now saying that many of the settlers in Viking villages were female, and that the society they lived in was pretty egalitarian.

Originally, the researchers who have been studying Viking society mis-identified the remains of the settlers as male because they were often buried with swords and shields. Finally sorting them by their bones, instead, it was recently discovered that approximately half of the remains were female.

And not only does this discovery prove that there were a lot more female Vikings than previously thought, but researchers are also theorizing that the whole “rape/pillage/war” thing that Vikings are stereotyped for has also been exaggerated.

Women may have accompanied male Vikings in those early invasions of England, in much greater numbers than scholars earlier supposed, (Researcher) McLeod concludes. Rather than the ravaging rovers of legend, the Vikings arrived as marriage-minded colonists.

It will be interesting to see how this shakes out in terms of revelations about how their society operated.

Editor’s Note: Any post about vikings would be incomplete without the following.

You may now continue with your regularly scheduled internet browsing.