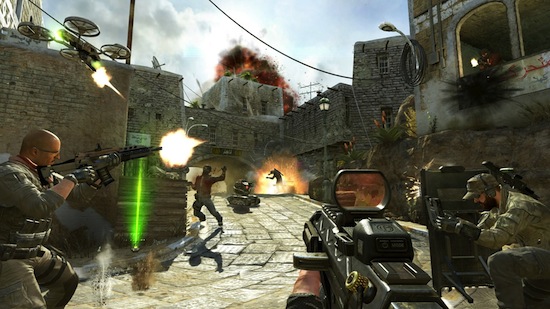 File under ‘Oy, This Again’: a recent poll of more than 2,000 Americans found that nearly 3 in 5 people surveyed believed there was a correlation between violent video games and actual violence. So for those of you wondering “Can we stop talking about this idiotic, imaginary, facile, and astonishingly unproductive link between digital violence and actual violence and maybe start looking at addressing some of the, I don’t know, real issues?” the answer is, sadly, no. Or at least not anytime soon.

According to a the results of a Harris Interactive poll of 2,278 American adults, fully 58% saw a link between violent video games and people committing actual acts of violence. Some more fun facts gleaned from the survey? 38% of folks have no idea what the games rating system means — and thus apparently no clue that there are suggestions to help them decide that maybe Call of Duty isn’t appropriate for their six-year-old yet, which whether you agree with it or not is every parent’s right. Oh, and a full 33% of parents surveyed admitted to letting their kids play whatever they wanted, suggesting that while nearly 60% of parents think that video games can transform their little angel into a remorseless killing machine, more than half of them don’t really seem to mind that much.

I hope you like having this stupid conversation with people — I sure don’t — because chances are good that it’s not going to stop anytime soon. With politicians on both sides of the aisle all too ready to chalk up recent violence to kids these days playing too damn many video games, chances are this depressing number isn’t going down anytime soon. Considering that sinking more money into studies on the impact of violent video games seems to be the only thing that Democrats and Republicans can agree on these days, you’ll see more and more of these studies in the news. Meanwhile, the looming sequester is about to slash NIH budgets by more than 8%, meaning that we’ll be able to find the cash to look at whether and FPS can turn you into a hardened murderer — we have, and they don’t — but cancer research can take a backseat.

Thanks to pundits, pols, and talking heads, the straw man of video games causing violence is well and thoroughly entrenched in the echo chamber. That means whether it has any validity or not — it doesn’t — people are going to keep talking about it, because hey, it’s pretty easy. Like, way easier than actually doing anything about the real issues at play here.

And really, who needs evidence when you’ve got what people believe on your side?