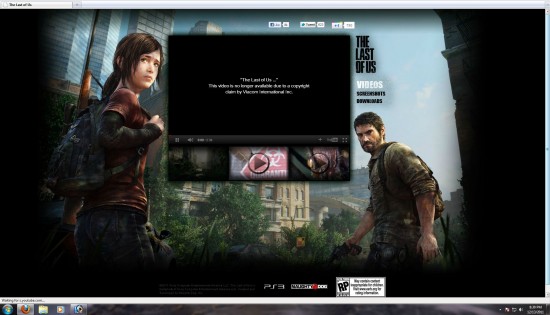 As you may know, Viacom is particularly jealous of its copyright. Viacom videos on YouTube that aren’t supposed to be there do not last long at all. In addition to that, it seems that Viacom has moved on to getting rid of videos that are only tangentally related to it, like Naughty Dog’s The Last of Us trailer. Yesterday, the trailer was pulled by from YouTube, leaving a hole in the game’s official site, all on the grounds that Viacom somehow owned it just because it initially aired on the VGAs on Viacom-owned Spike TV. It’s back now, but come on.

This is not the first time that a really, really questionable takedown request has had success. I mean, it happened to Bieber. The thing is that the situations are becoming more and more black and white, and while that makes them easier to fix, it makes them more egregious in the first place. Just a few minutes of research would have been enough to make sure that Viacom did not, in fact, have any claim to this trailer. But instead it was just taken down.

Of course, the lack of confirmation on YouTube’s end doesn’t justify Viacom flailing their arms and slapping takedown notices on everything either. It seems that Viacom, a company that deals with this sort of thing regularly, should have a decent understanding of what it means to hold the copyright to something and not be messing that up. I think the main problem here is automated — or almost automated — systems. There don’t seem to be any balances in place anywhere that check things like “Wait, do we really want to send this notice?” or “Wait, are we sure this is just not true at all?”

If you think it’s bad now, SOPA aims to give companies like Viacom more power to throw around takedown requests and rip the Internet down to its studs. Does it really need help? It looks like plenty of companies are doing a mighty fine job already. The cover-our-own-ass, enabling policies of companies like YouTube do make it worse, but you know what’d make it more worse? The cover-our-own-ass, enabling policies of companies that stand to get SOPA’d. Hopefully it won’t come to that.