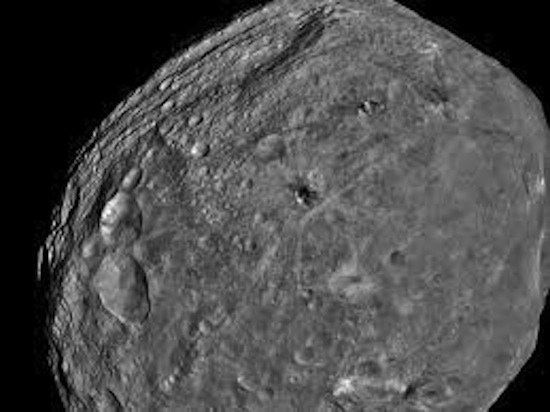 Many of us will be donning a fresh layer of  makeup and fake blood for this evening’s many Halloween parties, but we’re not the only ones in the solar system doing so. Vesta, which is either a giant asteroid or the beginnings of a planet that never quite made good on its potential, depending on who you ask, is continually updating its appearance. New data from NASA’s Dawn mission shows that Vesta isn’t affected by certain forms of cosmic weathering, and, in a way, manages to stay forever young, complicating efforts to gather information about the asteroid’s history.

Researchers have wondered why the outer surface of Vesta, which has been around for four and a half billion years, has remained so bright despite being regularly peppered by collisions with smaller asteroids. Those collisions should have left dark colored iron deposits all over the surface of Vesta, turning its dusty outer layer a dingy grey like that of the moon. While Vesta does have some dark splotches and stripes, there are not as many as one would expect on such an old and unprotected denizen of the solar system.

Vesta’s topography could have something to do with the constant mixing of its outermost layer of soils staying constantly mixed and surprisingly bright. The celestial body’s deep ridges and steep hills make it prone to landslides which can mingle old and new soil. That process keeps the newly deposited dark material mixing with the older, brighter stuff that initially composed Vesta. Having a better idea of what those materials are could give researchers a clearer picture of the early solar system that Vesta acts as a kind of time capsule for.