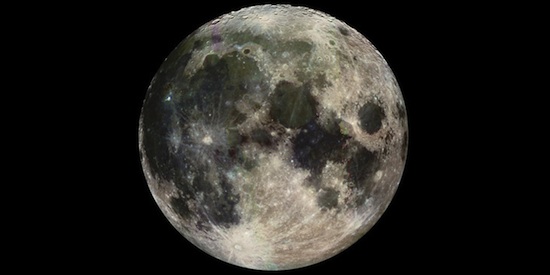 Researchers from the University of Tennessee have found proof for the theory that water present on the surface of the Moon is the product of solar winds. This work not only shows that other teams have been on the right track, but suggests that large, planet like bodies such as asteroids could also house water created by the same process, in which solar winds carry charged hydrogen particles millions of miles to bond with oxygen particles, producing water molecules in unexpected places.

Solar winds are streams of charged particles constantly flowing from the sun. When they hit the Earth, nothing much happens, as our atmosphere absorbs their energy. Without an atmosphere to protect it, though, the Moon takes the full impact of every charged particle the sun dishes out. Some of those hit the surface of the planet with such force that they can break oxygen bonds that exist in the gravel on our only natural satellite. When those bonds look to reform, they can do so with hydrogen carried on the solar winds, forming water.

This isn’t the origin of all water on the Moon — researchers last year found that water deeper inside of the moon was carried there by comets that struck the Moon. According to chemical analyses and mass spectrometry results, though, surface moon water is not brought from elsewhere, but made right there on the moon — albeit of imported parts.

The study also shows that the same process would be responsible for the creation of smaller but significant amounts of water elsewhere in the solar system, whether it’s on planets like Mercury or on large asteroids like Vesta. “These planetary bodies have very different environments, but all have potential to produce water. The finding also implies solar-wind contributes to water ice in lunar poles,” said Yang Liu, an assistant professor at the University of Tennessee and a co-author on the study, published this week in the journal Nature Geoscience.