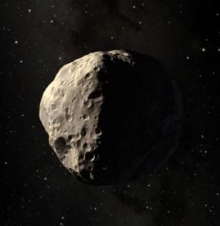 The potential for a huge asteroid impact is something that doesn’t just concern science fiction these days. Scientists have spent a number of hours pondering exactly how the world might deal with an incoming catastrophe from space. Somehow blowing up any wayward asteroids is a constant suggestion in popular culture, but the reality is that an explosion might just create more debris with which to deal. Sung Wook Paek, an MIT grad student, has suggested that we should instead fire two volleys of paintballs at any asteroid on a collision course.

Sung Wook Paek, a graduate student in MIT’s Department of Aeronautics and Astronautics, says if timed just right, pellets full of paint powder, launched in two rounds from a spacecraft at relatively close distance, would cover the front and back of an asteroid, more than doubling its reflectivity, or albedo. The initial force from the pellets would bump an asteroid off course; over time, the sun’s photons would deflect the asteroid even more.

Unfortunately, this would require 20 years of exposure before the sun’s photons would be able to push any asteroid off their trajectory. So, we could probably deflect one, but if we discovered that it was only 15 years out, our goose is cooked.