The Veronica Mars Movie Will Make A Comic-Con Appearance, Here’s What To Expect 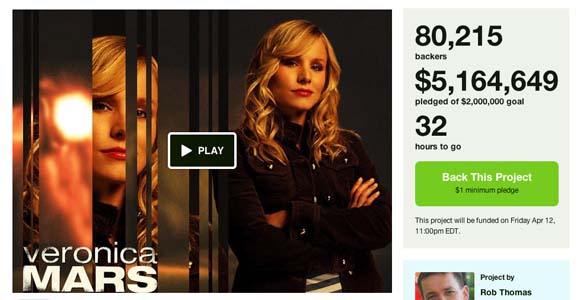 The Veronica Mars movie Kickstarter met its goal in just over ten hours but with just 30-some hours left to goal the question becomes, what do we do now? I mean, besides make the movie. Head to Comic-Con International in San Diego, of course!

Creator Rob Thomas has been thinking about a visit to SDCC for a while now but it takes some planning. He recently sent out an update to the supporters of the Kickstarter letting them know what to except from that appearance.

“We’re still working with the organizers to figure out if we’ll be holding an official, scheduled panel as part of Comic-Con,” he wrote. “I’ll be there, along with as many of our cast members as I can bring along, and we’ll be doing an exclusive Q&A session.”

They’re also planning an autograph signing at the Warner Bros. booth and a private party scheduled for July 19, 2013 at 7:30 p.m. in which you might just get your first look at the film.

The Kickstarter currently sits at over $5 million and in case you were blocked from donating previously because of your location, new countries have since opened up so you might want to give it another look. You can keep track of the latest news on the official Veronica Mars twitter account and in case you hadn’t seen it yet, they’ve put out a “director’s cut” of the Kickstarter video.