Name Calling And Rudeness May Have Biological Roots | The Mary Sue

Researchers Find Biological Indicator of Being a Rude Loudmouth 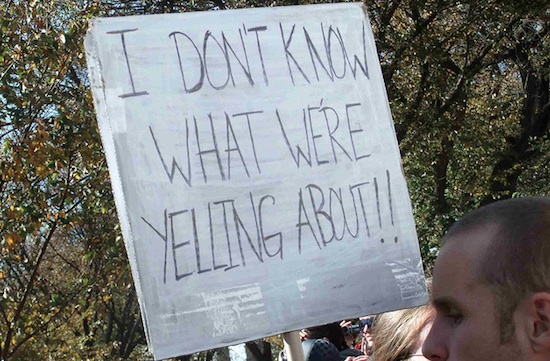 Researchers studying verbal aggressiveness think they may have found a way to track the trait all the way back to the womb. A study by scientists at the University of Buffalo claims to have found a link between verbal aggression and a person’s 2D:4D ratio — a comparison of the length of index and ring finger that can offer insight into levels of testosterone exposure in the womb. The result could be a system for learning whose first instinct is to the tell people to “Come at me, bro,” at a very young age.

Across both male and female subjects in the study, those with a smaller 2D to 4D ratio consistently reported being more verbally aggressive, defined by being prone to behavior like name calling, insulting others, making threats, using racial epithets, and other behavior that will generally get you asked to leave weddings, tea ceremonies, and other classy events where hollering insults around the room is frowned upon.

Researchers were quick to point out that verbal aggression can be a desirable trait — up to a point. Being verbally aggressive can make it easier to get you ideas heard and be seen as a leader. On the other hand, of course, it can also get you perceived as a bully and a jerk by those around you as they grow more and more tired of being shouted down or called names, which, as we all learned in kindergarten, is no way to make friends.

The results, say Allison Z. Shaw, a professor of communications at the University of Buffalo and lead author of the study, suggest that verbally aggressive people may actually be taking the defensive position more often than not. They’re just overestimating how often they need to defend themselves.

“… Verbally aggressive behavior may be provoked by biologically based differences in people’s attention to potentially threatening stimuli (such as a sigh), their appraisal of the stimuli as threatening and the resulting decision to respond and produce messages that are verbally aggressive.”

Shaw and her colleagues are hopeful that their research will lead to new insights that can help overly aggressive folks learn to rein in their behavior before it becomes detrimental to their lives, livelihoods and relationships.