Aggressive Tasmanian Devils May Need to Chill Out to Survive 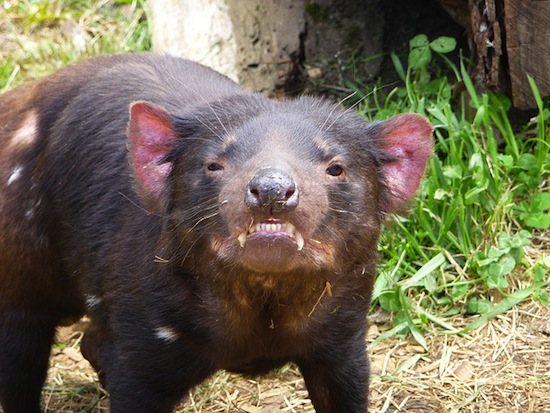 Today in Solutions to Problems That Probably Don’t Really Count As Solutions, scientists are proposing a new remedy to the bizarre, contagious facial tumors that are slowly but surely wiping out the world’s Tasmanian devil population. That solution? Make the creatures less aggressive. The disease that causes the tumors is spread by biting, which, aside from spinning rapidly in circles and being manipulated by Bugs Bunny, is pretty much all Tasmanian devils are really good at. Their whole raison d’etre is more or less based around biting. If you take that away, there’s an argument that you’re not really dealing with a Tasmanian devil at all anymore, but that may also be one of the only ways to save the species.

Tasmanian devils suffer from a contagious cancer known as Devil Facial Tumor Disease (DFTD) that has wiped out large numbers of the animals in recent years. The disease is spread by biting, which is basically the Tasmanian devil version of catching up around the water cooler. There is no cure, and no vaccine to stop the spread of the fatal ailment, but researchers running the numbers recently came across a surprising finding about the spread of the disease. The fewer bites a devil has received, the more likely it is to come down with DFTD.

That’s the opposite of what researchers expected to see, and may hold the key to halting — or at least slowing — the spread of DFTD. Less-bitten devils tend to be the most dominant and aggressive members of the species, while devils who are bitten more often are the weenies of the Tasmanian devil world, taking flack and abuse from more bullying, and apparently more cancer-ridden, peers. The more bites a devil dishes out, the more likely it is to contract the disease.

The research suggests that a new plan for keeping the species intact might be to identify less aggressive devils and introduce more of them to breeding programs, breeding out the creatures more excessively bitey instincts over a course of generations. It would change the nature of the devils a bit, but could rescue the species from what now looks like a reasonably sure path to extinction.

That said, taking the bite out of the Tasmanian devil is a little like taking the horn off a unicorn — at the end, you may have saved the species, but you’re left with a distinctly less glorious equine. And while we’d never question the noble intentions of these researchers, it does raise the question for conservationists in general. While some species could be saved by selective breeding or genetic tinkering, how far are we willing to change the nature of an animal to save it? Is it better to let a species die out as a menacing creature of nightmare whose very name is synonymous with ferocity — or ensure its survival by rendering it more mellow?