If You’d Like to Name an Exoplanet, Now’s Your Chance 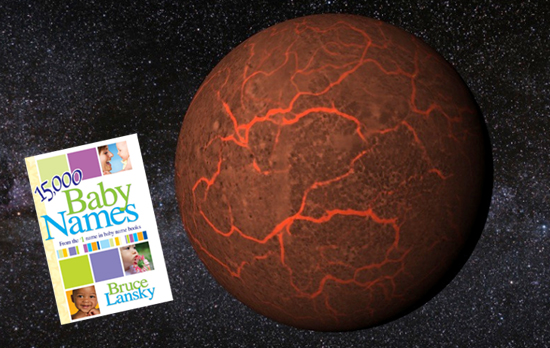 We’re living in a time when geeks are milling about the foreground of society, unchaperoned — where we get to exert our fanaticism in various directions. For example, it used to be that newly discovered astronomical bodies were given dry or alphanumeric names, but not anymore! Recently, non-scientist dorks are allowed — if unofficially — to name far-flung celestial objects. Just ask Pluto. Today, Uwingu is sending out a call out to name the most recently discovered exoplanet, and you can pay to enter the contest.

The word “exoplanet” makes me think of a planet with a spheroid, exoskeletal armor floating around it like the rings of Saturn, but it really just means a planet that lies outside  the Solar System. With well over 800 of them already discovered, the problem is that they’ve got uninspiring names. This latest one’s working name is Alpha Centauri Bb.

“Let’s face it, the current names astronomers use for exoplanets are boring. The public is really excited about all the planets that are being found around other stars, but the names do nothing to help fuel that excitement. We’re giving the public the chance to name the closest exoplanet.”

So, the “chance” is something you do have to pay for. $4.99 to suggest a new name, or $.99 to vote on an already-nominated one. While it does seem a bit of a shame that money has to be involved, it goes to Uwingu to fund space exploration, research, and education. Plus, if you won the contest, looking back years later, I imagine it would be more satisfying to be able to say, “I named that planet, son, and you’re named after it,” than to say, “Yes, I had that grande hazelnut macchiato that one time back in March of 2013.”

Note that the names won’t necessarily be official. The International Astronomical Union (IAU) — the group who demoted poor Pluto — has the final say, and they’re not convinced new names are called for. In a statement, they said:

“In response to frequent questions about plans to assign actual names to extra-solar planets, the IAU sees no need and has no plan to assign names to these objects at the present stage of our knowledge. Indeed, if planets are found to occur very frequently in the Universe, a system of individual names for planets might well rapidly be found equally impracticable as it is for stars, as planet discoveries progress.”

To which Dr. Stern said:

“The IAU has had ten years to do something about this and they haven’t done anything.”

Oh, snap! So the IAU may not make official what Uwingu cites as the winning name. But there’s a good chance that it would still “take” in posterity. Stern clarified this point with:

“Or it’s like Pike’s Peak. People started calling it that long ago and over time, it became the only name people recognized. This should be the wave of the future for planets and there’s no reason for the public not to get involved. Who knows. There could be a real Pandora or Tatooine out there.”

If I enter — and I might — my vote would go to Eternia. There are some cool names already on the nominations list, along with some that probably aren’t helping Uwingu’s case. Contenders include Heinlein, Asimov, Fraggle Rock, Super Mario, Kyle the Pie Man, and Pale Blue Dot. If you’d like to enter the contest, go to Uwingu’s site.

(via Universe Today and Uwingu, images courtesy of the Planetary Habitability Laboratory and Amazon)