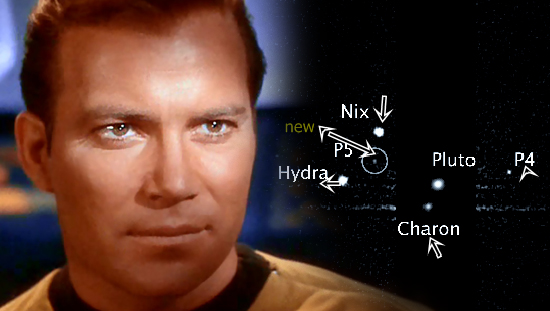 We should have known! When SETI announced that the public could vote to name the fourth and fifth moons of Pluto, they also allowed voters to suggest their own. Given the demographic of astronomy and sci-fi fans, this new twist in the space-time continuum should have been inevitable: William Shatner rallied Star Trek fans to vote for the added name of Vulcan — and now it’s winning!

Initially, SETI (“search for extraterrestrial intelligence”) provided a list of appropriate underworld names to continue the theme established by the first three moons, Hydra, Charon, and Nix, but my, how that list has grown! From 12 to 21, in fact. Most of the new names in the running, like Hecate and Tartarus, are at least mythological. Vulcan — the Roman god of fire — is only dubiously related to Pluto or the underworld of Roman myths. Let’s not kid ourselves, given who the standard-bearer is here. Vulcan is home planet of Mr. Spock, filled with mountains and deserts. Still, one must applaud the double meaning.

Only one of Shatner’s proposals made it this far. He also put forth Romulus (the home of Star Trek’s splinter race of Vulcans), but this was quickly dismissed by Mark Showalter, the co-discoverer of the new moons and one of SETI’s Senior Research Scientists, who will go before the International Astronomical Union (IAU) with the final names. Romulus is already the name of an asteroid and, in truth, the Romulus of Roman myth is a further cry from the underworld theme than Vulcan. 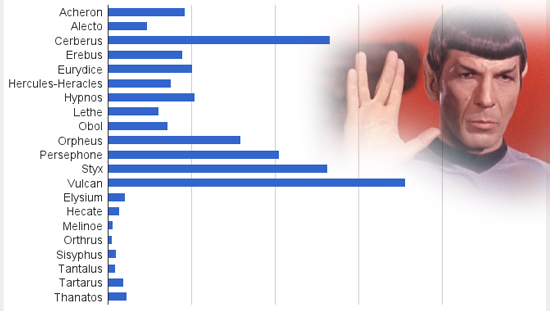 As you can see, Cerberus and Styx are the current runners up! Space already has one three-headed watchdog (an asteroid discovered in 1971), so Cerberus isn’t so necessary, is it? I personally hope Styx gets chosen, and Lethe would warm my heart. Chances are, Shatner’s choice will fly out the winner like a bat out of Pluto.

Whatever the outcome — and remember, you can still vote, too — we should probably be thankful that William Shatner, not George Lucas, is the celebrity who chose to rally fans and geeks everywhere. How would the universe have reacted if we named one of its satellites Jar Jar Binks? Would our sun go nova early?