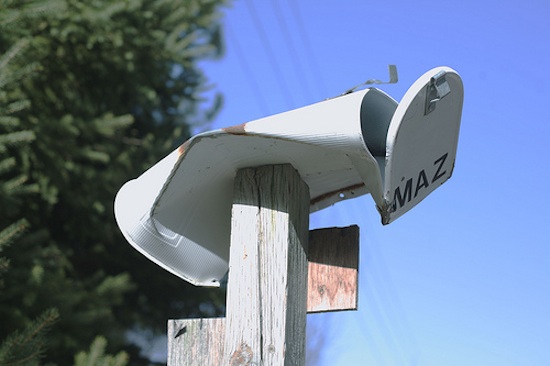 Look, we’re all in favor of progress here at Geekosystem. We’re scientifically inclined folk who believe that most technological development is, ultimately, for the good, and to be celebrated. That doesn’t mean immune to nostalgia. For instance, we’re going to miss the United States Postal Service, which continued it’s death throes today, announcing that it would cancel mail delivery on Saturdays. While this doesn’t come as a surprise — USPS has been warning for some time that steps like this one were in the offing — we’re just going to miss the post office being a thing, which it won’t be in, at this rate… I dunno, five years seems like a good over/under. We’re in mourning, and also taking all bets.

There was a time that every a stamped envelope was the way every letter was sent, every bill was paid, and every advertisement for penis-enlarging pills was delivered to homes across our fine nation. In those days, we needed post offices pretty much all over the damn place, because otherwise nobody would ever know how Aunt Dottie’s health was or pay Con Ed or send away for penis-enlarging pills, which back in those days really worked.*

Unfortunately, that time was about a trillion years ago. Now, advertisements for wang enhancers go to our spam folder, Con Ed and Netflix siphon their monthly due directly out of our bank accounts,  and  Aunt Dottie won’t shut up about her goiter on Facebook, meaning that unless you need to send a package to someone, there is very little compelling reason to use the post office. Oh, and also if you need to send a package, there is almost no chance you’re using the post office, so there’s that.

This makes me sad. I’m the product of a childhood spent waiting four to six weeks for delivery of collectibles earned with cereal box tops or birthday cards from far flung relatives, of swinging open mailboxes looking for new issues of Ranger Rick and later The Nation, and yes, of none too proud moments intercepting less than stellar report cards. I realize that this is all fairly standard issue nostalgia, but it’s mine, and it’s genuine, and I own it, as nostalgia is the hard won right of anyone who finds that they, too, are becoming old.

That’s not too say that things shouldn’t change. Of course they should. We live in a world that needs a post office less and less. Billing has moved nearly entirely online, as has banking. Letter writing has been replaced by Facebook messaging, and UPS and Fed Ex dominate the world of package delivery, and the best response USPS seems to be able to manage is to raise the price of stamps again. It’s the world we’ve built for ourselves, because it’s more efficient and convenient by a sight. But accepting a thing going away doesn’t mean you have to like it, and replacing it with something better shouldn’t keep you from being sad to watch it go.

And go it will. Domestic mail and shipping are continuing a steady decline. Physical mail is increasingly dominated by junk ads that have kept the Service limping along thus far. And cancelling Saturday service — for letters, as packages will still be delivered, confusingly — won’t be enough to save the Postal Service — not in the way we think of it by the way. What that means for how we get our mail — especially for customers in hard to get to rural areas, where routes are likely to face more cutes in an effort to trim budgets — remains to be seen. But it won’t be the post office we grew up with. That’s the way that things should work, and it’s also kind of a bummer.

In closing, I offer a modest proposal — write a letter to somebody today. Not an email? An honest to goodness physical letter, written in ink, on a piece of paper we had to kill a bazillion tress to make. The person you reach out to will appreciate it. Your local post office will appreciate it. Heck, you might even find something to appreciate about it.

Just don’t expect it to arrive on a Saturday.