Once Upon A Time Gandhi Wrote A Letter To Hitler 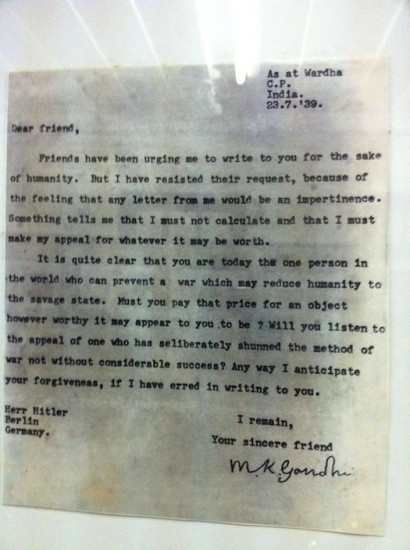 What do an iconic peace-loving protester and easily the most hated man in all of human history have to do with each other? The answer is simple: a plea that was never heard. Mahatma Gandhi wrote to Adolf Hitler on July 23, 1939 to ask him to keep World War II from happening. At the time, Hitler was already progressing through Europe, having invaded Czechoslovakia earlier that spring. The letter never reached Hitler, (for unknown reasons) and it is hard to image that it would have had much impact if it did.

Gandhi wrote two letters to Hitler, which are on display at Mani Bhavan, where Gandhi lived in Mumbai from 1917-1934. These letters are a known, but still shocking, part of the history of WWII. Certainly, they make you wonder what could have been, and even spark speculation about what the world leaders of our time really think about the current state of the world.

(via World of Wonder, History Today)