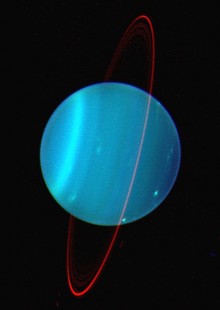 Most folks don’t generally give the humble planet Uranus much thought, except to make an off color homonym joke. However, Alessandro Morbidelli and his team at the Observatoire de la Cote d’Azur in France, think that they can overturn years of scientific speculation about the planet with a new theory of what caused the distant planet’s bizarre spin.

Uranus, unlike most planets in the solar system, has an axis tilted at 98º from the orbital plane from the sun. Nearly all planets are tilted to some degree — the Earth’s axis is 23º off, which gives us seasons — but none quite as much as Uranus. To explain this bizarre situation, scientists had long assumed that Uranus was struck by a body more massive than the Earth that knocked the planet on its side. However, there have always been some problems with this theory.

The central flaw of the single knock-out punch scenario is that Uranus’ moons orbits the planet at the same tilt. Since it’s assumed that the planet and its moons formed from the same spinning disk of dust and gas, then the moons would orbit Uranus around its pre-strike configuration.

Morbidelli and his team used a sophisticated computer model to tackle this problem, and came up with a radical solution. Instead of being struck once after it had fully formed, Morbidelli’s model showed that Uranus would need to have been struck while it was still forming. This would have changed the orientation of the unborn planet, creating its moons in the familiar position we see today.

However, there was a flaw in Morbidelli’s initial model. In the scenario it described, the moons were in the right position but with the wrong motion. The model called for the moons to have a retrograde orbit, that being in the direction opposite their current orbit. To solve this, the team tweaked the scenario to include not one but a series of strikes on the forming planet. The team says that with at least two hits, Uranus’ axis becomes tilted and the moons orbit properly.

Interestingly, this not only requires the scientific community to rethink the creation of Uranus, but possibly of the solar system. Conventional wisdom held that during the formation of the outer planets, only small objects were created. If Morbidelli’s theory holds up, it would present a different, perhaps more volatile, view of the early solar system. That’s a pretty big change from our far-off neighbor with a funny sounding name.