The Moon May Be Millions Of Years Younger Than Previously Thought 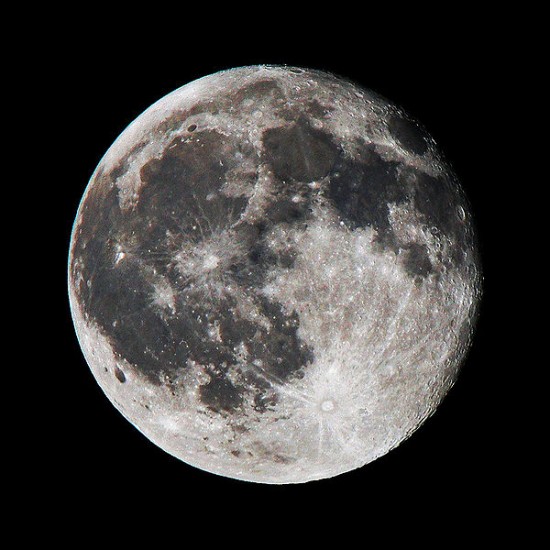 A new analysis conducted on lunar rocks brought back to Earth by the Apollo 16 astronauts has led researchers to believe that the moon may be 60 million years younger than previously thought. This would make the current prevailing theory about how the moon formed impossible. The new results date the moon at around 4.36 billion years old, which means that the moon formed around the same time as the oldest crusts on Earth (4.4 billion year old zircons from Australia.)

Led by Lars Borg of the Lawrence Livermore National Laboratory in CA, the researchers used new refining techniques to study the isotopes lead and neodymium in a 1.88gram sample of  ferroan anorthosites (FAN) from NASA’s lunar rock collection. The 4.36 billion year number refers to the time when the sample crystallized. This opposes the giant impact theory, the currently favored theory about moon formation (although this theory has itself been called into question lately.)

The giant impact theory says that a collision between the early proto-Earth and another proto-planet called Theia caused melted ejecta and debris to be thrown out into space. This debris eventually coalesced over millions of years to form the moon. As the moon cooled and solidified, the magma changed mineral consistency and the oldest lunar crystal rocks, the FAN, formed.

“It’s the first time a single sample of FAN yielded consistent ages from multiple isotope dating techniques. Previous attempts to date these rocks have relied on just one isotopic clock which can be contaminated putting the age in error. So we started with the idea that we would get multiple age samples so we could have confidence it reflected the crystallization age of the sample.”

The research, reported in the journal Nature, isn’t providing a definite explanation for the age of the moon or how it formed. The researchers are suggesting that the results they obtained, with the most up to date and sophisticated techniques, shows that the moon solidified much later than previously thought, or current beliefs about how lunar crust formed from magma are incorrect.

Even if the study doesn’t overturn the giant impact theory, it could have an effect on the process researchers use to date rocks and their understanding of how rocks form and the impact on dating.