Piracy Is Not Theft But Unwarranted Takedowns Are | The Mary Sue

Piracy Is Not Theft But Unwarranted Takedowns Are 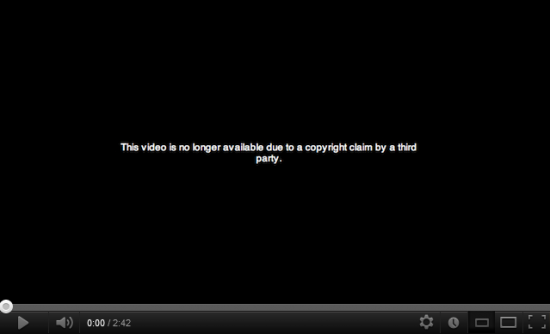 Who ever would have thought that one of the most relevant issues to copyright infringement and piracy in the 21st century would be something as seemingly insignificant as a semantic distinction? Yet, here we are. Granted, “copyright infringement” is an unweildy term, and “piracy” is one that can feel overly broad, but “theft” — in almost any digital context — is flat-out inaccurate and, frankly, misleading. Many people, myself included, will get dragged into arguments all the time for saying “piracy is not theft” and having it misconstrued as some kind of value statement. It isn’t; it’s a statement of fact. But beyond all that, there’s another reality of digital media sharing, consumption, and control that is woefully ignored: Piracy is literally not theft, but the unwarranted takedown of non-infringing material is.

“OK, and that deprives the rightsholder of sweet, sweet monies, doesn’t it?” Not necessarily.

The point that’s really material to this issue is that not everyone who pirates is a potential customer. Many people will watch a thing because it’s free. It’s a little bit of a contentious point, but the fact of the matter is that these people, in particular, aren’t costing the rightsholder anything in lost sales. Granted, they shouldn’t be allowed to see or hear a thing outside of the rightsholder’s sphere of influence on principle, but the fact that they can isn’t necessarily hurting anyone.

Now maybe there are some people who would have otherwise paid to see the video, but there’s no reliable way to measure their number. Attempts to try have been questionable and contradictory at best. So in the end we can say it might be a detriment to rightsholders. How much is anyone’s guess.

Current copyright law isn’t completely oblivious to this fact. The DMCA Safe Harbor provision protects — in theory — companies like YouTube that handle user submissions from legal trouble, so long as they’re trying to police their content. The definition of “trying,” however, is getting perverted as companies like Viacom are arguing that you are only “trying” if you take down anything and everything at a moment’s notice and the courts are backing them up. It’s rendering the Safe Harbor provision ineffective and encouraging sites to adopt increasingly overzealous takedown policies.

This is bad. It’s very bad. Why? Because more stringent and knee-jerk takedown policies — which are strongly incentivized by the big, costly lawsuits that big, monied rightsholders file against sites left and right — mean more innocent rightsholders get caught in the crossfire and have their own legal content removed by mistake in a frenzied attempt to make sure nothing slips through the cracks. The resulting unwarrented, accidental takedowns of legitimate content are the real dark side of today’s digital copyright protocol.

Unlike piracy, unwarranted takedowns of non-infringing content literally rob rightsholders — mostly smaller rightsholders who aren’t represented by groups like the MPAA and RIAA — of something: Their legitimate right to disseminate their work. Whereas leaving up an infringing video might have a negative effect on a rightsholder, taking down a non-infringing video definitely has a negative effect on a rightsholder; it’s not there anymore. Takedown policy isn’t a matter of dealing with two absolutes. It deals with one grey area and one absolute and, against all logic, it leans in favor of the grey area.

That’s not even the only problem though. Infringing content doesn’t divert the flow of legitimate customers away from legitimate venues. A video of a hit single on YouTube won’t block customers from iTunes, or Amazon, or a physical store. The unwarranted removal of non-infringing content is far, far more likely to disrupt legitimate viewers from finding the content they have every right to view. Rightsholders who are giving up their content for free are far more likely to use YouTube or MegaUpload as their main — or sole — medium of distribution and when it’s taken down, the content is completely unavailable. In cases like MegaUpload, it’s likely that many rightsholders with legitimate public or private files on the site will never, ever get them back.

Now, at this point, I feel the need to state the following explicitly: I am not advocating that infringing content be left on the Internet indefinitely. Not at all. In fact, non-removal of infringing content would completely invalidate my argument.

One of the main counterarguments against this logic has to do with number of views on infringing content. It’s true that infringing videos will often attract many, many viewers who are already familiar with the content through it’s legitimate means, press coverage, word of mouth, or what-have-you. Many smaller rightsholders who offer their content for free are fighting tooth and nail against competition, exerting Herculean effort to get tens and hundreds of views, while hundreds of thousands will pirate an infringing work. So isn’t it justifiable if a few videos get taken down by mistake so long as the popular infringing videos don’t slip through the cracks? After all, no one is looking anyways.

If you want to ignore Blackstone’s formulation, than by all means do. But if you’re going to acknowledge it, apply it universally. If you want to fight copyright infringement and piracy, at least make damn sure that’s what you’re actually doing. Let’s not run around, our arms flailing, ripping content off the Internet at the slightest whiff of a hunch that maybe-it-might-somehow-kind-of be infringing on someone’s copyright somewhere; there is far, far more to be lost that way than there is to be gained.