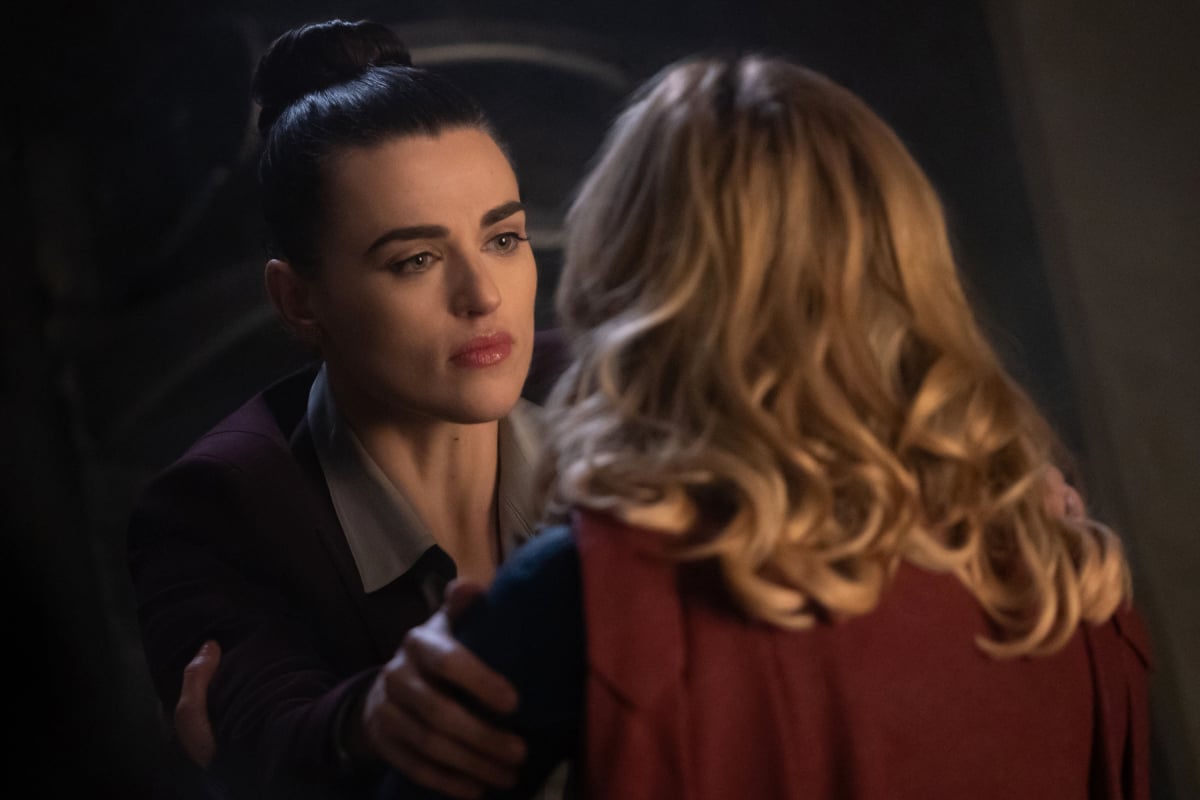 During the 100th episode of Supergirl, we focus on the most important relationship in the series, besides The Danvers Sisters: Lena Luthor and Kara Danvers/Supergirl’s broken friendship. In “It’s a Super Life,” we get to watch Kara, with the help of Mxyzptlk, attempt to go back in time and tell Lena the truth in the hopes of saving their friendship in the present day. The results are … mixed.

Kara attempts to turn back time (find a way) four different times—first confessing her truth to Lena before Mercy Graves’ attack during season four’s “Fallout,” then during the Reign storyline with Sam (who I still miss). The third time, she goes back to the beginning of their friendship and confesses, and then, in the last attempt, she erases their friendship from the timeline completely.

What has been really frustrating about the Lena betrayal storyline, after how long it took us to get there, is the fact that, as a result, we seem to be getting this idea that Lena was always heading into darkness in some way, without Kara there—or that somehow, her relationship with Lena would become a burden to the goals of being Supergirl. I’m not sure I agree with either of those takes.

In the first two attempts to correct her mistake, Lena is still emotionally devastated by the fact that Kara lied to her. She tells Sam that the fact that Supergirl was so angry about Lena making kryptonite, but Kara remained her usual supportive self, was really hurtful and confusing. However, that then leads to Lena deciding not to save Kara when Agent Liberty puts kryptonite into the ozone, and Kara dies—which feels like a huge leap, especially when Kara goes back again to before they have that fight, and Lena does end up helping them without kryptonite. It just leads to Lena dying, instead.

I have heard people criticize Lena for the fact that she reacts poorly every time Kara tells her truth, but the fact that Kara bites the bullet and confesses to Lena doesn’t erase that she lied to Lena. I don’t even think her reaction was that poor in the second occurrence; she had just finished dealing with a very emotionally stressful situation. Plus, it’s important to remember that Lena has a very close personal relationship with Kara. Kara knows her secrets, her hopes, her dreams, her fears, and Kara didn’t share those things with her fully.

My real point of contention comes with the third timeline, where Kara tells Lena the truth all the way in the early stage of their friendship. Lena accepts Kara openly, and they build this powerful friendship that makes the Cult of Rao more powerful. Ben Lockwood becomes radicalized in this timeline, because his family joins the cult and jumps off a roof thinking that Supergirl will save them. She does not. Lockwood kidnaps Lena and holds her hostage unless Kara reveals her identity to the world. She does and manages to save Lena, but the Agents of Liberty kill all her friends, including Cat Grant (who I still miss.)

Okay, so I hate this idea that Lena knowing who Kara is would lead to this direct issue. Lena is not the only person with power that would have known Kara’s identity. James Olsen, who was also approached by Lockwood in the original timeline, also knows who Kara is, and she never had to give up her identity to save him. If that logic were sound, then everyone Kara has ever told (which is a significant amount of people) would be in danger all the time. If this actually was an issue, then wouldn’t they just have Lena get temporarily mind-wiped the way they did with Alex last season? There are just so many in-universe loopholes.

Fascist Lena in the final scenario rests on the idea that if Kara and Lena were not friends, then Kara as Supergirl wouldn’t save Lena from almost getting shot? That doesn’t make much sense, because Kara has tried to save her enemies all the time. She saves strangers. Lena not being her bff suddenly means she can be a target? It’s messy—even though Lena’s haircut/lipstick combo was excellent.

At the core of this story, it’s there to say that Kara is done apologizing, and now it’s up to Lena to de-villainize herself. It hints that Lena was, in many ways, too broken to have ever fully forgiven Kara, which I don’t think gives Lena the justice she, as a character, deserves. If she could survive her best friend from childhood betraying her, she could handle the death of a three-year friendship.

Lena finding out about Kara through Lex, having fatally shot him, was the most traumatic way she could have discovered that information. Plus, Kara kept picking situations where they were also in danger and in need of Lena’s intelligence soon after. There was no chance for Lena to unpack this in a healthy way.

Katie McGrath has been killing it this season, and I think that if we got back to the reason why Lena moved to National City, it was always to prove that she wasn’t a Luthor, that she could share the skies with a Super, and that she was good. I hope the show and Lena remember that.