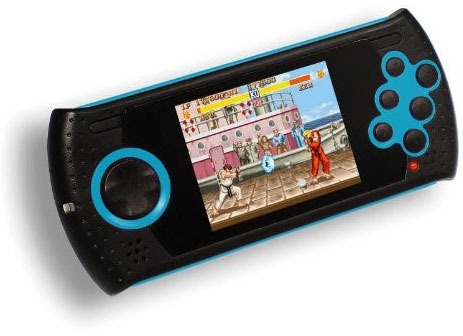 If you’re either one of those gamers that loves retro games, or you just really dig collecting odd gaming gadgets, At Games is sprucing up their line of devices that house multiple older games with the new, dramatically named Ultimate Portable Game Player. The unit houses 40 Sega Genesis games, and 40 “arcade” games, which could mean anything.

Among the Genesis games are Street Fighter II: The New Challengers, the only Mega Man released on the Genesis, Mega Man: The Wily Wars, Comix Zone, and Sonic and Knuckles. Browse the full list of games here, there are a decent amount of Genesis classics.

The unit features a 2.8-inch screen, an SD card slot, a rechargeable battery via USB, and will allow an AV cable to plug the device into a television, though the unit will not come with the cable itself. At Games has said that the 80 pre-loaded games aren’t where the list ends, and more games will be released for download in the future, which can be loaded onto the unit with an SD card.

The Ultimate Portable Game Player, which we feel has a name that needs to be emphasized in some way and went with italics, will release on November 13 for the price of one current-gen console game, $60.

If you follow the scene of weird gaming devices, you might’ve noticed that this unit looks strikingly similar to another At Games device, but don’t worry, that one only features a measly 15 Genesis games. We’ll admit that there’s something oddly attractive about this world of obscure portable gaming devices, but we really don’t need yet another way to play the still-fun Comix Zone. Head on over to the At Games site if this — or other weird gaming devices — tickles your highly ticklish fancy.