That New NeoGeo Portable Now Has a Price, Release Date | The Mary Sue

That New NeoGeo Portable Now Has a Price, Release Date 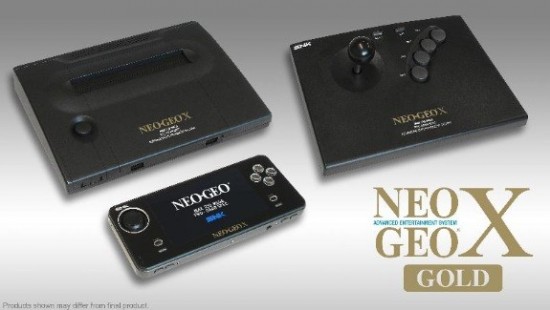 Earlier this year, the world received word of a fancy new NeoGeo portable. It isn’t like the NeoGeo Pocket, which played individual game carts, but is more like a modded handheld gaming device that plays a variety of software in one unit. NeoGeo enthusiasts were pretty thrilled, most likely because apart from the legitimately sleek design, they wouldn’t have to jailbreak their PSP or phone just to have a bunch of NeoGeo games accessible from one device. Today, the unit, dubbed the NeoGeo X Gold, has received its very own pricing and release date.

The new NeoGeo unit will release on December 6, only a few months away, at a relatively hefty suggested retail price of $199.99. For those wondering how that stacks up to modern portable gaming devices, a Nintendo 3DS is a bit cheaper at $169.99, while the new Nintendo 3DS XL matches the NeoGeo X Gold’s price of $199.99. A Wi-Fi only PS Vita runs $249.99, while the 3G-enabled model runs at $299.99. One may wonder why they should pay current generation prices for old games revamped in a modern hardware shell, and the only justifiable answer other than pretending the unit is some kind of collector’s item is that it comes with an array of popular NeoGeo classics on one unit, whereas a 3DS or Vita requires you to buy the individual games (or commit dastardly deeds).

The 20 games that come pre-loaded onto the NeoGeo X Gold are as follows:

On top of some of those legitimate classics — like Metal Slug and Fatal Fury — the NeoGeo X Gold comes with a  station that looks like a NeoGeo and a NeoGeo X joystick, which when connected to the handheld, transfers the game action to a connected television via HDMI or A/V out. The handheld is fairly sleek, sporting a 4.3-inch LCD, internal stereo speakers, a 3.5mm headphone jack, and most importantly, an expandable game card slot. Though the price of $199.99 for a dedicated console to play games you might already own on other handheld devices or consoles — including your phone — might seem like a bit much, the NeoGeo X Gold is sure spark nostalgia in some, and satiate that desire gadgetphiles might have to get their hands on new tech. Also, you know, three different Fatal Fury games are always a fun time.