Crap on Wheels! The UK’s First Poo-Powered Bus Has Hit the Road!

Wow. I didn't think being stuck behind a bus could get worse. 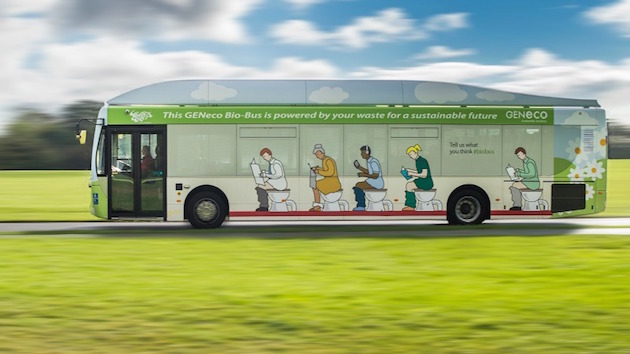 The UK’s first “Bio-Bus,” which I’ll begrudgingly admit is catchier than “poo bus,” runs on human waste and food garbage kind of like the Back to the Future DeLorean after its Mr. Fusion upgrade—only with less time travel and more poo.

Now when your in-laws won’t stop talking about your child’s seemingly unlimited energy and how much they wish they could bottle it up, you can just hand them some dirty diapers and direct them to Bristol sewage treatment works. That’s where the Bio-Bus’s biomethane fuel is produced from waste and food that is unfit for human consumption.

The bus is just a small part of Wessex Water subsidiary GENeco’s waste-powered renewable energy efforts; they already provide the biomethane to a national gas network that’s capable of powering 8,500 homes. Collin Field of the Bath Bus Company that is operating the bus service said in the Wessex Water news release, “Up to 10,000 passengers are expected to travel on the A4 service in a month, which is available not only for airport travel, but also local journeys along the route through Saltford, Keynsham, Brislington, Knowle and Hengrove.”

A full tank of gas allows the 40-seat bus to really go green and travel about 186 miles after it fuels up at GENeco’s dedicated filling station. Although, what would be really great for the future is if they had a system in place for passengers to… refuel the bus on the go. I’m assuming scribbling “Mr. Fusion” on the side of the bus toilet won’t have any effect in that department, but that probably won’t stop me.

(via Engadget, image via Wessex Water)