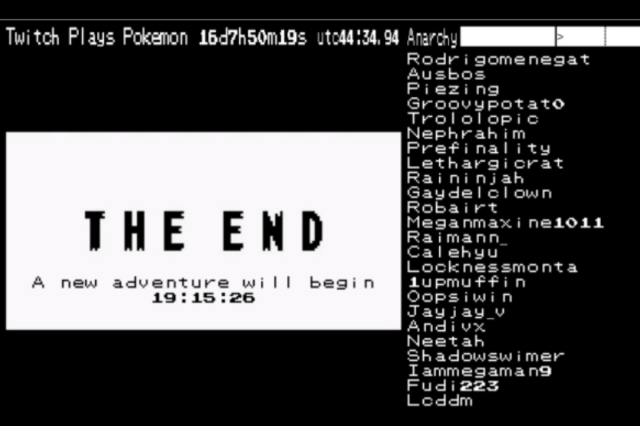 When Twitch started their massive online co-op play-through of Pokémon Red three weeks ago, no one thought they would ever make it to the Elite Four. But against all odds (remember when they struggled for six hours to use Cut on a tree?), last night Twitch finally beat Pokémon. It’s more beautiful than your butterfree flying off into the sunset.

With over 650,000 total participating users and millions of viewers, the Pokémon stream ran 24 hours a day, 7 days a week until the internet co-operatively (if you can call it that) took down the Elite Four. Here’s a full video of Twitch’s final battle against Blue – and it’s pretty epic.

Now that the final battle has come to an end, the live Twitch stream says a new adventure will begin early tomorrow morning; but Twitch Plays Pokémon Red will always have a special place in our hearts for being the first of its kind.

And sure, you could say that beating the game is proof that, when millions of people come together on the internet, amazing things can happen; or, that the collaboration of so many minds (even at their most anarchistic) can lead to good.

But if you ask me, there’s only one reasonable explanation for Twitch’s success against Blue:

(via Kotaku, image via Twitch)