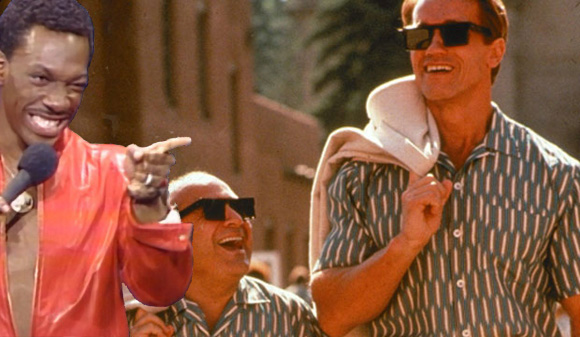 Apparently the news of this film came out earlier this year. We either didn’t see it or we blacked out when we heard it. Either way, here we are. A sequel to the 1988 comedy Twins, starring Arnold Schwarzenegger and Danny DeVito is getting a sequel. The two leads will return. It will be called Triplets. Eddie Murphy will play their new lost brother from the same mother. Previously, it wasn’t certain this was happening but now they’ve got a writer attached so prepare yourself in whatever way you feel necessary. I’m going to pull out my zombie apocalypse kit.

Schwarzenegger just doesn’t know how to leave the past in the past. Sure, people get a kick out of seeing him in The Expendables but he’s set to play Conan again and now this?

The Hollywood Reporter writes, “Josh Gad, the star of Broadway’s The Book of Mormon, and Ryan Dixon, who oversees operations at screenwriting analysis website ScriptShark, have closed a deal to pen Triplets, Universal and Montecito Picture Co.’s sequel to the 1988 hit comedy Twins.”

I was going to try and explain the premise of Twins for those of you who weren’t familiar, but I went to Wikipedia to brush up and found I couldn’t top theirs. “Julius and Vincent Benedict are fraternal twins; the results of a secret experiment carried out at a genetics laboratory to produce the perfect child, using sperm donated by six different fathers.”

One was a street tough, the other an intellectual, hilarity ensued.

Can we take comfort in the fact that Murphy won’t be playing ten different parts in the movie? No, we can’t. Seriously though, picture these three actors on screen together. Hollywood needs an intervention.