Arnold Schwarzenegger Is Going To Play Conan The Barbarian Again 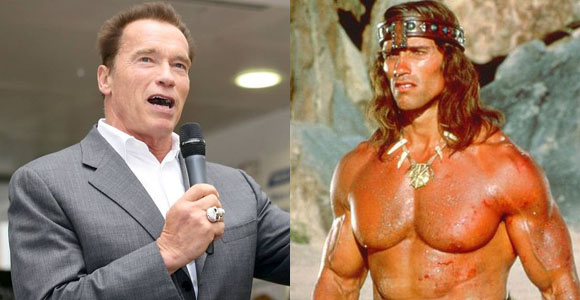 Look, I’m just gonna say it. Someone needs to shoot Arnold Schwarzenegger with some elephant tranquilizers and give him an intervention. The 65-year-old actor is going to reprise his role as Conan the Barbarian in a new film. This is just…I have no words. No wait, I do. BY CROM!

Deadline reports the former Governor of California is set to take the lead in a new film titled The Legend of Conan. This reunites Schwarzenegger with Universal Pictures, the studio which helped launch his career with the first Conan the Barbarian film in 1982.

“The film will be produced by Fredrik Malmberg and Chris Morgan. Malmberg is CEO of Paradox Entertainment, which holds the rights to Conan,” writes Deadline. “Morgan is the Universal-based writer and producer whose credits include the last four Fast And The Furious films, along with Wanted and 47 Ronin. Morgan has hatched the story and might write the script.”

They’re looking at a Summer 2014 release date. Schwarzenegger had this to say, “I always loved the Conan character and I’m honored to be asked to step into the role once again.”

So how is this all going to work exactly?

“The original ended with Arnold on the throne as a seasoned warrior, and this is the take of the film we will make,” said Malmberg. “It’s that Nordic Viking mythic guy who has played the role of king, warrior, soldier and mercenary, and who has bedded more women than anyone, nearing the last cycle of his life. He knows he’ll be going to Valhalla, and wants to go out with a good battle.”

Should we be saying the same about Schwarzenegger? I’m not saying he’s not still in great shape, I’m just saying, maybe he should stop trying to stay relevant and just retire from action films. It was tough accepting him back as the Terminator and The Expendables franchise is at least a different animal, it’s all older action stars, but can Schwarzenegger be taken seriously as a headlining action hero these days?

Game of Thrones’ Jason Momoa inherited the Conan role in the 2011 reboot. He was great in the role but the film failed to become a hit. He’s not expected to play a part in the new film. In fact, The Legend of Conan is going to take place directly after the first Conan, ignoring its sequel.

“After the original seminal movie, all that came after looked silly to me. Robert E. Howard’s mythology and some great philosophy from Nietzsche to Atilla the Hun was layered in the original film,” said Morgan. “This movie picks up Conan where Arnold is now in his life, and we will be able to use the fact that he has aged in this story. I love the property of Conan so much that I wouldn’t touch it unless we came up with something worthy. We think this is a worthy successor to the original film.”

Are you convinced or do you share my mind-set on this whole thing?